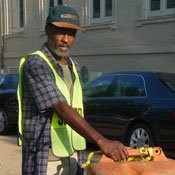 Patrick Payton made his way to Smith Park this morning in hopes of getting a free haircut, but ended up putting on a parking-attendant vest and directing traffic for this morning's One Stop Service Fair.

Payton and several homeless men and women arrived early this morning to Smith Park, where community organizations and the city of Jackson provided them free services such as haircuts, food stamp-application assistance, foot massages and employment information.

When Heather Ivery, the city's homeless program coordinator, asked Payton to put on a vest and direct traffic, he gladly volunteered. He eagerly waves to the cars as he coaxes drivers through two large orange cones. The Brookhaven native served in the U.S. Marine Corps from 1977 to 1979, and says he was also hoping to find assistance for veterans at the fair.

Payton, 51, says he studied mass communications at Alcorn State University and worked in sales until he ran into personal-finance issues a few years ago. "It seems like the wheels came off, and I haven't been able to get on track," he says.

Payton says he would like to see more umbrella services for the area's homeless. "My perception of what homeless was before I came to Jackson has drastically changed," he says. "Many of the people who profess to be homeless get Social Security checks and have jobs, but they have a tendency to not handle their monies. Because they don't have an understanding of handling their money, they blow it. Of all the agencies and people who try to give, sometimes it's like putting money in a bucket with a hole in it."

Even though he says he is down on his luck, Payton remains positive because he believes his situation is temporary. "This too shall pass," he says. "No matter how good things are, it's going to pass; no matter how bad things are, that too will pass. But you've got to be prepared to handle the bad."

Project Homeless Connect Week runs Sept. 20-2 4 with events designed to educate, empower and connect those affected by homelessness in the metro area. Events include a photography exhibit, "That's Not All There Is: Snapshots and Stories of the Homeless" at Eudora Welty Library (300 N. State St.), The Mixin' It Up concert Sept. 23, featuring homeless and former homeless musicians at Smith Park from 11:30 a.m.-1 p.m.; and the Conference on Homelessness Sept. 24 at Galloway United Methodist Church (305 N. Congress St.) from 8 a.m.-4 p.m. Free; call Ivery at 601-960-2178 for more information.