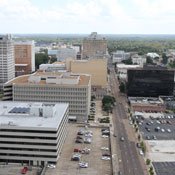 In developing a long-range plan, Greater Jackson Chamber Partnership wants input from a broad base of residents who live in all parts of the metro area.

The Jackson metro area's economy continues to improve despite a national recession. In a report the Brookings Institution released Friday, Jackson is one of 20 strongest-performing U.S. metro areas out of 100 U.S. metros during the second quarter of 2010.

"The U.S. economy's performance is driven largely by that of its major metropolitan economies," the report states. "Although the available economic data for metropolitan areas reflects the more favorable experience of the second quarter of 2010 rather than that of the gloomier third quarter, the data paints a picture of a very uncertain economic recovery."

The new findings come after a June Brookings Institution report naming Jackson one of only 10 metropolitan areas in the country to experience positive job growth in the last quarter of 2009 and the first quarter of 2010.

"This latest recognition is certainly great news for our city and it continues to signify that our Capital City is truly open for business," Jackson Mayor Harvey Johnson Jr. said in a statement.   "We are enjoying a great deal of development, both in downtown and in other areas of Jackson and as major projects continue to come on line, we expect to see even more growth."