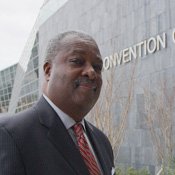 Jackson Mayor Harvey Johnson Jr. touted his plans this morning for expanding Metrocenter Mall to contain office and retail space that would model life-style centers in Ridgeland and Flowood.

Johnson told a crowd at Koinonia Coffee House that the city had purchased a section of the Metrocenter Mall, and intended to see the mall develop into a project combining the government administration, private businesses and residential neighborhoods. The plans, which fit in with the city's goal of improving the Highway 80 corridor, would the branch the mall into two sections, the proper, containing office and retail space and Metrocenter South--an open-air shopping center adjacent to the proposed Metrocenter South Parkway, which could re-channel traffic from Lynch Street.

He said other projects in the Highway 80 corridor include investing in a $7 million facility to house the city's buses between Terry Road and Ellis Avenue. The city is also looking to develop the area directly behind the SAKs Operations Center, near the Interstate 20 and Highway 80 intersection, and to renovate the 20,000 square-foot site of the Mississippi Department of Environmental Quality headquarters into an entertainment center. He also touched on plans for a series of potential development projects, including industrial parks, residential areas, parks and bike trails along the Highway 80 corridor between Terry Road and the Metrocenter Mall.

Along with the Highway 80 corridor, Johnson said the city is gearing up to spend $2 million to enhance parks and sidewalks in the Fondren area.

"(Mississippi Department of Transportation) gave us a grant that we're matching," Johnson said referencing the Fondren project, "and we're looking at other projects between State Street and Woodrow Wilson."

The city, for example, plans to promote growth along Woodrow Wilson Avenue near the University of Mississippi Medical Center's proposed medical office park, which is slated to break ground next year.

"Health care is a fairly recession-proof industry, as indicated by growth at UMMC, and we're trying to figure out how we can bolster that industry here in Jackson," Johnson said, while describing a corridor along Woodrow Wilson "that will focus on health care" with the city "working with health-care providers."

Johnson listed numerous projects in the downtown city area, such as new entertainment venues opening in the Farish Street Entertainment District and the available residential property in the recently renovated Standard Life Building, but he also said the city wanted to focus on the Jackson Zoo, a park with a surrounding neighborhood that has grown old and dilapidated around it.
"Livingston Park is an important part of the zoo property. The city hasn't done as much as it's needed to do, so we've committed ... to entering into some partnerships with the Zoo Foundation and the (Mississippi) Department of Wildlife, Fisheries and Parks to rehabilitate that park," Johnson said.

Johnson also said the city has new methods to deal with dilapidated property along Capitol Street and other places because of a new state laws allowing the city to claim abandoned property more easily.

"We got legislation passed that will allow us, once we tear down a dilapidated house, to charge the owner for those costs and then put those costs on the property-owners' taxes. That'll get their attention, because that bill is going to come out, and if they don't pay those taxes that property can be sold for taxes," Johnson said. "We're very serious about that."

Keep on trying to break through that wall, Mayor Johnson. I think that the community at large is beginning to not only hear your message, but, to see some of the fruits of your labor. We are predicting an even bigger and better crop this term. Hang in there and continue to plant these positive seeds!