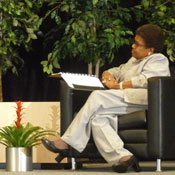 Community leaders called for an audience of more than 250 to move from rhetoric to action and to help shape a better future for Jackson's youth during Operation Shoestring's "A Conversation about Community" event last night.

The panel's moderator, Clarion-Ledger Perspectives Editor Sid Salter, started the discussion by stating the growing statistics on national poverty, with the number of people living in poverty reaching in highest level in 51 years last year. He also said the state has decreased its budget by 25 percent over the past five years.

"That sets the tone for where we are," he said. "Obviously, Jackson carries with it its own unique set of problems. ... We are going to talk as we do at home, we are not going to talk with kid gloves on, and we are going to try to talk honestly about these topics."

Salter introduced a host of issues such as poverty, the role of public education, health care and race.

McLemore pointed to the state's high teen-pregnancy rate as the source of teachers and schools having to take on a more parental role with students.

He also decried poverty in the state's capital city, citing the city's water crisis last winter and how difficult it was for the city to receive financing from the state Bond Commission to repair its infrastructure.

"The attorney general, the state treasurer and the governor didn't put the item on the agenda," McLemore said. "It's about politics, race and a lot of matters. But that shouldn't happen in 2010. That shouldn't happen in the city of Jackson, with what we went through this past winter. We should be outraged. But we aren't. It takes all of us to be concerned about this community and move it forward."

Salter asked the panelists if they thought race was the sole cause of "white flight" from Jackson to the suburbs.

Slaughter-Harvey, who was the first African American woman to receive a law degree from the University of Mississippi in 1970, pointed to the emergence of the Tea Party as evidence that racism still exists.

"While race is so important in Mississippi and in this country, I think that with the rebirth of the Tea Party--and I said rebirth--that I fully understand the matter of race," she said. "So your question of whether not the exodus of whites from Jackson is based on race, I know you know the answer, otherwise you wouldn't have asked it. But I do think its important to bring it up" Slaughter-Harvey said.

McLemore added that high numbers of middle-class African Americans have also left the city to find better opportunities in the suburbs.

Operation Shoestring, located on Bailey Avenue in Jackson, is a multi-faceted nonprofit organization that provides afterschool programs and services for families and children.

Operation Shoestring Executive Director Robert Langford emphasized the need for community partners and volunteers to join in the organization's efforts. He attributed Operation Shoestring's success to measuring and meeting its goals. The organization is on track to raise 25 percent more in funding this year and recently received a grant from the Mississippi Department of Education to host afterschool and summer programs for students at Lanier High School.

For more information about Operation Shoestring, or to find volunteer opportunities, visit the organization's website.