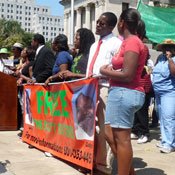 A crowd of hundreds attended a rally today calling for the release of Jamie and Gladys Scott.

Hundreds gathered on the south steps of the state Capitol today to rally in support of Jamie and Gladys Scott, two Scott County women serving life sentences for a 1993 armed robbery that allegedly netted them $11 each.

Supporters of the Scott sisters marched from Farish Street Park to the Capitol, where a long list of supporters called on Gov. Haley Barbour to grant the two clemency, amid recurring chants of "Haley Barbour can't you see? Scott sisters must go free." The sisters have exhausted their appeals at the state level, and Jamie Scott is reportedly suffering from kidney failure.

Many speakers at the rally argued that the sisters' sentences were disproportionately severe, regardless of their guilt or innocence.

"All we're saying is (to) follow the spirit of the law," Jackson Municipal Judge Ali Shamsid Deen said. "Even if they were guilty, where is common sense and decency?"

A Scott County jury convicted the two sisters of armed robbery in October 1994, for allegedly orchestrating the robbery of two men near Forest Dec. 24, 1993. The three other men involved have all served their sentences for the incident and been released.