Demand Up, Money Down 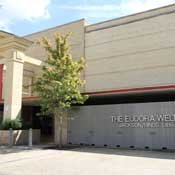 The Eudora Welty Library is one of many area libraries partnering with the "One Jackson, Many Readers" program.

Despite seeing an increased demand for library services, Jackson-Hinds Library System Executive Director Carolyn McCallum said it will struggle to maintain services and hours for Jackson residents in the upcoming budget year.

Due to shortfalls in state funding and devalued Hinds properties, McCallum told city council members during a Sept. 8 budget hearing that the library system expected a 10 percent smaller budget for fiscal year 2011, which begins in October.

On Sept. 9, McCallum requested a 15 percent increase in funding for the library system, an additional $224,879 or a total of $1,720,288, from the city of Jackson for fiscal year 2011. Last month, McCallum also requested $1,720,288 from Hinds County to cover shortfalls due to cuts in state funding and a tax reduction on devalued Hinds County properties.

On Sept. 9, Jackson Mayor Harvey Johnson Jr. told city council members the city could allocate $150,000 of the additional funds the system had requested for 2011. The city's finance department realized an additional $100,000 due to lower interest rates on the city's bonds refinancing, which is bringing a total of $5.6 million in savings to the city this year. The additional $50,000 is from the city's technology fund, which can only be used for technology upgrades and purchases.

"We wanted to do this as a good-faith gesture to support the library," Johnson said after a meeting.

When McCallum learned last Friday that the city had come up with an additional $150,000 in funds for the library system in its fiscal-year 2011 budget, enough, she expects, to keep all libraries open, she celebrated with her staff. "We were just praying that we wouldn't have to close branches," she said. "We are all smiling."

Hinds County District 1 Supervisor Robert Graham said the library system wasn't the only department that did not receive any additional funds from the county.

"Revenues are down much lower than we expected," Graham said. "In order to adopt a balanced budget, we are going to have to furlough county employees eight days during the next fiscal year—one day a month for eight months. ... The library is a priority, but it just fell victim to the budget."

McCallum said the library system budget is down 10 percent overall and hasn't determined how its smaller budget will affect positions and services. She added because of the economic downtown, the library has seen an increase in computer use and library services.