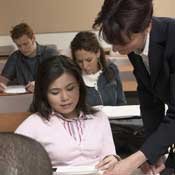 The ratings are a result of student's spring 2010 Mississippi Curriculum Test scores.

Seventy-five percent of the district's schools met the adequate yearly progress standards the 2009- 2010 school year under the federal No Child Left Behind law.