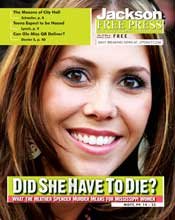 Managing editor Ronni Mott won first place in non-deadline reporting among non-dailies in the southeastern Society of Professional Journalists' Green Eyeshade Awards for cover story "Did She Have to Die?"

SPJ's Green Eyeshade Awards honors top print, broadcast, radio and online journalism in the southeastern region of the United States, covering 11 states. The Jackson Free Press was the only Mississippi media outlet honored in this year's awards. "It's an amazing honor to be honored by the Society of Professional Journalists," editor-in-chief Donna Ladd said today. "This is the first year we competed in these awards, and bringing home four for some of our most difficult and often-controversial work could not be more meaningful. We thank SPJ for its willingness to recognize the little guy alongside the largest dailies, weeklies and magazines in the southeast."

Managing editor Ronni Mott won first place in non-deadline reporting among-non-dailies for her coverage of domestic abuse and the murder of Heather Spencer, an award she accepted Saturday night on the third anniversary of Spencer's brutal murder by her boyfriend George Bell III in the home of his mother, Robbie Bell. Mott's 2009 story, Did She Have to Die? was the latest in a long series of investigations and features by the JFP's managing editor about domestic abuse in the Jackson area. In the story, she broke down the earlier abuse and murder of Spencer, showing the failures by law enforcement, the community and Mississippi law, creating a roadmap to prevent similar murders in the future.

The reporting team of Ward Schaefer, Adam Lynch and Donna Ladd took first place in courts and the law reporting, competing against all dailies and non-dailies, for coverage of the 2009 federal trial of Frank Melton, including detailed stories and timelines about the incidents leading up to the trial. In 2006, Lynch broke the news about the duplex destruction on the Jackson Free Press website. The Jackson Free Press previously has won several awards for Melton coverage from the Association of Alternative Newsweeklies. See a full archive of the JFP's Melton coverage here, including the 2009 stories surrounding the trial that drew this award.

Editor-in-chief Donna Ladd took first place in serious commentary for her essays about Melton's trial ( "Live and Learn"), his death (), "The Charms of Frank Melton" and the young men he "helped" ("Tearing Down the Wrong Walls").

The reporting and analysis team of Adam Lynch, Ward Schaefer, Donna Ladd and Todd Stauffer also won a second-place public service award for reporting and columns in 2009 about the "Two Lakes" project, and particularly for exposing that proponents of the project were behind the Greater Jackson PAC, which was funding a mayoral candidate who supported the project without following proper campaign-finance and disclosure procedures. Over several stories, the JFP investigated the PAC and was able to reveal just before the election that would-be Two Lakes developer John McGowan and several others McGowan Working Partners associates had provided the bulk of the PAC's funding. An archive of the JFP's coverage of the Two Lakes/Pearl River campaign is here, including the 2009 stories that led to this award, as well as a second place in public service from the Association of Alternative newsweeklies earlier this year.

Since the Jackson Free Press launched in 2002, the paper has won 19 national reporting awards, in addition to these four southeastern regional honors.

Read more about the Society of Professional Journalists here.

Good job. Congratulations to all. Frank is still hitting from the grave. His legacy lives on!

Congratulations! We are so lucky to have the Jackson Free Press in the metro area. How quickly we have come to accept you as an institution that we can't live without. We can always expect hard hitting news from JFP. Thank you, Staff!

Thanks, all! These awards are a wonderful birthday present this week. We turn 8 with tomorrow's issue!

That's funny because I've been reading the JFP since 2002. LOL. Edit made.

Wow, First and second place recognition while competing for the first time. Congratulations. I still say that Frank Melton coverage is at minimum a book and at most a good Sunday Lifetime movie!

Congratulations, Donna and the JFP! Keep up the great work that you do. As the familiar lines go: "If a man can write a better book, preach a better sermon or build a better mouse trap than his neighbor, the world will make a beaten pathway to his den." The "pathway" has been made. Again, CONGRATULATIONS!!!!!

Congratulations, all. This recognition from SPJ is long overdue.