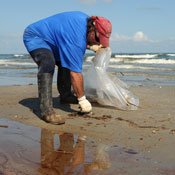 A worker cleans up oily waste on Elmer's Island, just west of Grand Isle, La., May 21, 2010. Attorney General Jim Hood says it may take years to assess the full damage.

Mississippi Attorney General Jim Hood said it could take years to assess the extent of harm the BP disaster in the Gulf of Mexico caused.

Even as the memory of the Gulf Coast deepwater oil geyser fades from the mind of many people outside the Gulf Coast, the lingering money problems the devastation spurred continue.

In July, international credit rating company Moody's estimated that the three-month oil explosion from the BP deepwater well did enough damage to rob the Gulf Coast region of 17,000 jobs and could cost the Coast $1.2 billion in lost economic growth by year-end.

"People aren't happy," said Gulf Coast resident Linda St. Martin, a spokeswoman for coastal fishermen. "Our shrimpers and oystermen are very unhappy and worried. They are so worried. Many of the businesses impacted so severely depend on tourism.

But Hood said the true nature of oil damage will encompass more than immediate revenue loss.

"It might be OK for fishermen to say, ‘I made $50,000 a year for the last 10 years.' That's $150,000 for three years ahead or whatever. They may try to take a $150,000 settlement with BP, but then he or she needs to think about the really long-term impacts. What if the fish or shrimp they're catching disappear? The herring up in Alaska disappeared five years after the Exxon-Valdez oil spill. The adult fish don't suffer the same affects that juvenile fish or shrimp do."

The petroleum company addressed the mess days after the uncapped oil well began gushing into the sea.

St. Martin said it is too early to judge whether Feinberg is doing a good job of getting payouts from the fund to suffering Gulf Coast businesses. But Hood warned that people accepting payouts from the fund have no way for to assess the real economic damage stemming from long-term environmental catastrophe, and that other states could benefit unfairly if any premature assessment is made.

"We're monitoring this natural resource damage assessment process that is being run by the National Oceanic and Atmospheric Administration," Hood said.

Compiling environmental data is no easy matter, and BP has done its part to silence information-gatherers, according to numerous media accounts. The American Association of University Professors says BP is trying to buy the silence of the scientific community in preparation for long-term litigation.

AAUP President Cary Nelson blasted BP for issuing contracts to scientists that restrict them from publishing research they conduct for BP or to speak about the information for at least three years, and that scientists can only do work for other agencies so long as it does not conflict with the work they are doing for BP. The AAUP also reports that the contract mandates that scientists testify for BP in court if needed.

The U.S. House Committee on Energy and Commerce wrote a July letter to BP complaining that "any effort to muzzle scientists or shield their findings under doctrines of legal privileges could seriously impede the recovery" of the Gulf Coast.

Other voices are raising alarm at the settlement deal the U.S. government has orchestrated with BP.

Hood said he has his own issues with the settlement process, pointing out that the process restricts anybody closing a settlement with BP from later filing a claim against BP in court. Hood argued that any beleaguered coastal business suffering from the oil spill needs to be fully informed of its total losses before concluding a settlement, including losses stemming from long-term environmental destruction that may not manifest for years.

The attorney general said he also took issue with a settlement waiver immunizing BP's business partners involved in the gulf disaster, including Transocean and Halliburton.

"We disagree with those waivers, although I could understand why BP would want them. BP has some indemnity agreements (with those business partners) whereby they agree to pay for damages caused or damages sought against one of the people they've hired to drill the well," Hood said. "We're still working with Feinberg to get things put into place, like having some legal counsel ... before people make these long-term decisions (on their settlements.)"