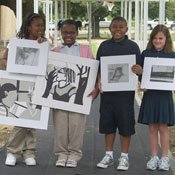 Students produced the Power APAC "Day in the Life of a Hutterite Child" exhibit, from capturing the images to developing them.

Several years ago, art teacher Cheryl Bannes began a photography project with the Hutterite children of Montana. Bannes worked with children 9 to 14 years old, as they documented their home lives. At the project's end, of the 1,200 students chosen to be in a traveling exhibit, 35 of were Hutterite children.

When the Hutterite photographs crossed Hamburg's desk, it was to urge her to to display them at APAC. Instead, she decided it would be more beneficial to her students if they did a similar undertaking of their own. Her goal: to bring two cultures—the Hutterites, who are much like Amish people—and Jackson youth together through their work.

"Everyone is not the same. ... I wanted them to see that they are also unique in the experiences they're having," Hamburg says. The students easily grasped this concept.

In Hamburg's classes, where she works with fourth grade to high school students, She discusses the Hutterite community with her students, and they talk about what makes a community. When taking their own pictures, Hamburg instructs the students to focus on their own sense of place at home and in their communities.

Hamburg gave the elementary students disposable cameras, and the high schoolers used 35mm cameras. Students developed and enlarged all the photos in the class darkroom.

"It's exciting. It's almost like magic when you see a picture develop," Hamburg says. "They were excited to see their images come up on the photographic paper—all of the age groups."

The photos ranged from grocery stores to unmade beds. The stronger images, Hamburg says, were ones that were more up close and personal. One girl took the camera with her to the hair salon where she goes monthly with her mother; another student took photos of her dad cooking dinner.

The Visual Arts Department of JPS Power APAC School hosts "A Day in the Life of a Hutterite Child" at Tattered Pages Bookstore in The Commons at Eudora Welty's Birthplace (719 N. Congress St., 601-352-3399). The opening reception is Sept. 9 at 5:30 p.m.; the show runs through the month of September.