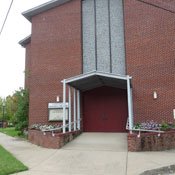 The congregation at the Farish Street Baptist Church is engaging in Jackson's renaissance.

Johnson, who has been the pastor at Farish Street Baptist since 1968, remembers when Farish was a vibrant community for middle-class African Americans. As the historic district begins to rebuild itself after decades of economic decline and blight, Johnson wants his church to have an active leadership role in a host of issues including the city's declining tax base, new developments and engaging area youth.

At the Aug. 31 forum, the majority African American congregation filled the 117-year old church, listening to speakers and holding them accountable with questions. Perkins championed the city's efforts to restructure its budget without laying off employees, and remained optimistic about the future of Jackson, despite declining tax revenues.

"I have rebuked the idea and the thought that because we are an over 80 percent African American city, that there is something wrong with the city of Jackson. ... What we need to do here in the city of Jackson, as residents, is do the same thing. Now the flipside of that is that we have to accept the fact that not everyone who lives in Jackson looks like the majority of us in this church today," Perkins told the crowd.

Shepherd, who is overseeing the 50-acre Old Capitol Green development and mixed-use district, said he wants to bring Jackson back to the sustainable, walking community it was several decades ago.

"We plan for Old Capitol Green to be a walkable community, where you can walk to the grocery store, where you become healthy by walking more, he said. "You can go almost anywhere from Old Capitol Green and downtown—walking—within 15 minutes. It's the same concept as a village, but it took all of our master's degrees, all of our PhD's in order for us to realize that we were designing a community that we used to have."

When residents began asking Shuler Smith about alternatives for probation sentences and the state's high incarceration rate, Franklin redirected the discussion and called for the audience to focus on intervention.

"Can we discuss the role of the church in having proactive and preventive measures for our youth, before we talk about sentencing and before we talk about what is going to happen with them when they get out of jail?" Franklin asked the audience. He then pointed out that there was youth present at the forum.

Shortly after Franklin's assessment, a representative from Rowan Middle School called on audience members to mentor male students at the school. With prompting from McLemore, the audience passed around a sign-up sheet, and six volunteers committed their time.

Johnson said that he never intended for the forum to be a mechanism for solving community issues, but a venue for residents to have constructive conversations and build trust.

"The goal for me was not to solve issues, it was to understand issues," Johnson said. "You can't solve what you don't understand. I've been a community activist for more than 40 years. What I've learned is that the reason we fail on so many fronts, is because there is no trust among partners."