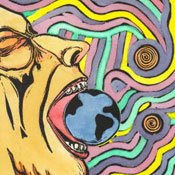 Robert Holleman's "World Bite" is a personal favorite of the artist.

Robert Holleman's art is anything but ordinary. The artist's brilliantly colored wood-block prints of tarot cards are like an occult version of the Walter Anderson alphabet prints, which Holleman cites as inspiration. A print he created in 1991, entitled "World Bite," is one he especially hoped to see hanging in his exhibit at the Light and Glass Studio. The piece, he says, is a response to the first Gulf War, and is a colorful depiction of a person preparing to bite the globe.

But it's Holleman's pottery that garners him the most attention.

His current works of nerriage pottery (a technique that uses different color clay bodies in a single vessel) have clear glazes, which he mixes himself at his studio in Ebenezer, Miss.

Traditional Asian pottery heavily influences Holleman's clay work, perhaps because he spent time working as an apprentice for master of pottery Masanori Yamazaki. Holleman's work, however, is a style all his own.