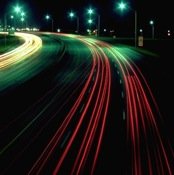 The state improved from the organization's overall ranking of 28 in 2007. Mississippi ranks 8th for maintenance disbursements and 13th for urban interstate congestion but is 45th in the nation for highway fatalities.