The Lingering Effect of Dispersants 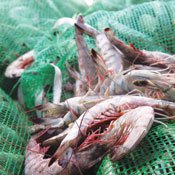 While Gulf seafood like shrimp is passing the Federal Drug Administration's safety test, the long-term effects of dispersants on health are unknown.

Even though the Federal Drug Administration and other U.S. agencies remain confident that oil and dispersants are not tainting Gulf seafood, the jury is still out, according to some tests and opinions.

As early as Aug. 6, the FDA declared the food collected from Gulf areas recently reopened for fishing safe and said 1.8 million gallons of Corexit chemical dispersant that BP poured into the sea to dissolve oil was unlikely to show up in the food chain.

White House energy adviser Carol Browner told reporters earlier this month that the president served Gulf seafood at his birthday party Aug. 4 in part to ease doubt about the safety of food. The White House website states, "Consumers need to know that seafood from the Gulf of Mexico is safe and fishermen need to be able to sell their products with confidence," and claims multiple agencies including the FDA and the National Oceanic and Atmospheric Administration are working to "ensure the safety of Gulf Coast seafood" by testing samples from reopened waters for oil and dispersants.

But while adult organisms from open seas are passing government tests, organisms wriggling through the Gulf's beaches and lagoon—many of which serve as the bottom of the food chain for the critters in the open sea, and who will grow up to be the next generation's food catch—are not so clean.

Harriet Perry, a biologist with the University of Southern University's Gulf Coast Research Laboratory, found orange oil droplets under the carapace of blue crab larvae, which suggests that oil in the Gulf has worked its way into the beginning links of the food chain.

"In my 42 years of studying crabs, I have never seen this," Perry told the Associated Press in early August.

The blue crab population could take a hit—and prove emblematic of other Gulf denizens. Author and marine toxicologist Riki Ott, who has reported extensively on the 1989 devastation of the Exxon-Valdez oil spill in Alaska's Prince William Sound, told the Jackson Free Press that the true devastation is tied to the growth pattern of marine life and may take years to truly manifest.

"The entire Pacific Herring population of Prince William Sound suffered a 99 percent kill rate a total of four years after the Exxon-Valdez oil spill," Ott said, explaining that the oil decimated the fish fry and killed off a whole generation. "This isn't an apples to oranges comparison between Exxon-Valdez and the Gulf Coast disaster because you had fresh toxic oil every day for three months. It doesn't matter that BP is saying (the oil is) weathered. If it was so weathered, why were BP employees getting such ripping headaches? If it had been a one-day blowout, it would have been a whole different scenario, but it was every day, and every day there was more oil and more dispersant."

Unfortunately, the loss of whole generations of sea life may not be the end of it. Ott said many of the lowly links of the food chain may actually gather too little oil to prove toxic to their systems, but predators devouring the small links could end up retaining their prey's oil traces. In this manner, the ingested toxins become more and more concentrated as they slither up the food chain toward the Gulf's top predator—fishermen.

Fox 8 in New Orleans reported earlier this month that Tulane University researchers may have uncovered the presence of BP's toxic dispersant Corexit in more blue crab larvae. Preliminary results suggest that the same orange blobs of oil discovered under the carapace of blue crab larvae appear to contain traces of Corexit.

Martin O'Connell, director of the Nekton Research Laboratory at the University of New Orleans, told Fox that the jury is still out on Corexit's ability to accumulate down the food chain: "If you're a small fish and you eat 1,000 of these small crab larvae and all of them have oil or Corexit droplets in them they could get into the fish — that little fish could be eaten and so on and so on," O'Connell said.

Mississippi Sierra Club Executive Director Louie Miller said the BP disaster likely won't be over for years, despite the capping of the well.

"This disaster is just beginning. It's not ending, despite what BP and their apologists want you to believe. The bottom line is there are still 103 million gallons of oil in the Gulf. Even using the White House's cherry-picked low estimate, there's still 103 million gallons. That's nine times greater than Exxon Valdez, settling onto the ocean floor, getting into organisms. Nobody knows how long this stuff is going to be with us, but if history is the teacher here, we're in it for the long haul."

Miller's opinion on the safety of Gulf seafood, at the moment, marks a stark contrast to that of the White House. "I wouldn't eat gulf shrimp. And since Corexit ... is listed as carcinogenic and rejected for use by the European Union—which actually has a way to de-list a dangerous dispersant, unlike the EPA—I'll be eating South Carolina shrimp," Miller said.