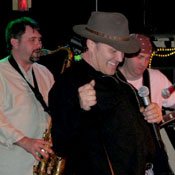 Southbound may be a new band name, but its members--who hail from Jackson, Philadelphia, Sebastapol and Union--are seasoned musicians who've played all over Jackson, Nashville and everywhere in between for decades. They left the band Santa Fe and formed Southbound last year. Led by front man Jeff Stewart of Philadelphia, Southbound members are Andy "Cookie" Henderson on keyboard, Nic Massey on guitar and vocals, Joe Latham on bass and vocals, and Clint Marshall on drums and vocals.

From running a rental store, to trucking, to farming, to retail, each of these musicians works hard during the day. But at night, they come together away from work to have some fun and make some music together.

Covering artists ranging from Marvin Gaye to Hank Williams, Southbound plays classic southern rock, classic and new country, soul, and just about everything in between. In fact, the band only plays covers. Jeff Stewart spoke to the Jackson Free Press by phone.

Tell me a little about the band and how you got started.

I've been playing around Mississippi for several years. My first band was in 1978, and I've been a front man for bands ever since. Southbound has been together about a year. We were all in Santa Fe--some of us for up to 15 years. We played a lot of great shows together at the frats around Mississippi State and Ole Miss. We left Santa Fe a year ago to start Southbound. We're all seasoned musicians. Our drummer is just an awesome country boy with an incredible voice for country songs. It goes really well to have such a wide range of stuff that we can play. We get together and work out the starts and the stops.

Have you had any large moments or national exposure?

We're just now getting started, obviously. We did get to play for the after-party at the Dixie National. That got us viewed by a lot of people and really opened the door for us.

How would you describe your typical audience?

We don't really have one. It's been pretty diverse. We've done a lot of private parties.

What is your favorite part of performing?

It's more than just doing the job. It's the playing for me. I love to play for people. We all do. I play for free. It's a lot of work when you're setting up your own equipment and pulling it down. That's what we get paid for. We love the music and the crowds.

How would you describe your energy on stage?

It's a high-energy presence. We play a lot off of each other. Everyone is real capable with their instruments. That creates a relaxed feel and confidence.