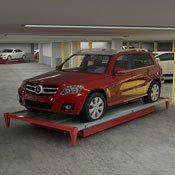 Old Capitol Green developers want to know what is keeping county supervisors from signing on with a $20 million state bond funding a roboticized parking garage.

The city of Jackson may host a new Latin and Caribbean-culture festival in September if the Jackson Redevelopment Authority and Novia Communication & Media Group can agree on using Union Station and Union Marketplace as its venue.

Novia CEO Ben Minnifield approached the JRA last week with the prospect of convincing the JRA, a quasi-governmental authority that owns and manages Union Station, to allow Novia to use the property to host a Sept. 18 festival featuring Latin and Caribbean music, food and entertainment.

"This is a one-day, Saturday, event," Minnifield told the JRA three weeks before the event was scheduled, adding that the event coincides with Hispanic Heritage month, which begins Sept. 15.

"We'll be looking to tap into the culture of people we often overlook: the Hispanic and African-Caribbean markets that are here. We have a cadre of Latin artists that have already signed up to perform at this event, and we're having an international talent contest," Minnifield said. "... We're asking JRA to waive the costs associated with the use of Union Market and Union Station to allow us to share the proceeds with JRA. We'll generate profits through the sale of tickets and booths, but we need a platform to allow this festival to begin."

The JRA may not allow free use of JRA property to for-profit companies, but the authority can arrange an agreement for a percentage of revenue the venture generates. Minnifield said sponsors like Target, Kraft foods and Walmart are eager to jump on board so long as Novia Communications pins down the venue. The JFP was not able to confirm the sponsorship with the companies before press time.

JRA board member John Reeves said he was leery about using the picturesque Union Station to host a party.

"We spent $7 million renovating that building," Reeves said. "It's a beautiful building that's been renovated back to an earlier period—wooden floors, gorgeous structure. I'm worried about a big party of people running in and out of the building like that, for the same reason we wouldn't want a big party like that at the state capitol. Who is going to pay for the damage if they spill beer or wine on the floor?"

Minnifield pointed out that the festival, which should run from 10 a.m. to 4 p.m., is an alcohol-free family event, and said his company would arrange for insurance coverage of up to $1 million to handle any damage.

Reeves referred to the recently defunct Jubilee!JAM festival, warning that the city does not "have a good history of successful festivals," except for an annual crawfish festival on the fairgrounds which, in Reeves' words, "sold a lot of beer and got people drunk."

JRA member Ronnie Crudup said he was "excited about doing something" with the largely unused Union Marketplace, however.

"We've had a lot of arguments at the board about not using these facilities. I'm hoping that these events will be the first among many," Crudup said. "I'm confident our lawyers can craft the kind of agreements that will enforce reasonable risk in order for this to move forward."

Reeves, who said he had nothing against the festival itself, made a motion for JRA attorneys "to move forward" with crafting a lease agreement with Novia Communications that would protect Union Station and Union Marketplace, bringing the agreement back to the JRA for approval.

The JRA also agreed to begin work with Full Spectrum on the construction of an 806-car parking garage and a cooling unit serving Full Spectrum's $1.3 billion Old Capitol Green development. The automated garage, which would use Boomerang Systems' proprietary robot valets, has an estimated $27 million price tag after adding $5.3 million for an adjoined communal cooling system.

Full Spectrum Development Director Malcolm Shepherd said the project will likely qualify for about $6 million in federal and state new market tax credits and would require a $20 million bond, either issued through the Redevelopment Authority or Senate Bill 3281, allowing Full Spectrum to borrow $20 million from the state.

"A $10 million parking garage would not produce the type of space we need," Shepherd said. "On the average, a structured parking garage runs about $22,000 per space. Multiply that times 806 you get a $17.7 million garage, so either way we go, a $10 million garage wouldn't get it. We'd need a $17 million garage, and it's going to cost us more because more people are going to have to work in that traditional parking garage. This way, we're creating new, high-tech, green jobs in the robotics industry, and we're bringing a new product to the city of Jackson—which really should initially turn out to be tourist attraction. Nobody around here has robotics parking."

Full Spectrum anticipates the garage and the cooling system to pay for itself with revenue drawn from a multitude of residential and commercial residents spanning the 50-acre development. Ownership of the building could fall to the JRA after seven years.

Reeves said he was eager to get the process moving and voted in accord with other JRA members to dedicate attorneys and accountants to work with Full Spectrum to devise a $20 million bond and payment plan.

"I was impressed with the Full Spectrum presentation, and I'm excited to see this project finally turn dirt," Reeves told the JFP. "I voted in favor of the project while I was in the Legislature, and I've been optimistic that something would happen, and this is wonderful."