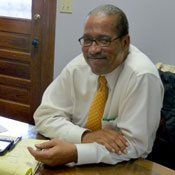 Melvin Priester Sr. believes better communication can make the Hinds County judiciary more efficient. Priester grew up in the Roxbury neighborhood of Boston, Mass., and attended Boston University, where he met his wife, Charlene. Priester received his bachelor's degree in 1972 and a master's in rehabilitation counseling in 1973. After working as a psychiatric social worker for eight years, he entered law school at the University of Texas in Austin, alongside Charlene, and received his J.D. in 1985.

The couple moved to Jackson and opened the Priester Law Firm in 1988, focusing on general civil practice. The firm has represented the Jackson Medical Mall, Hinds County and the Jackson Convention Center.

Mayor Frank Melton appointed Priester to Jackson Municipal Court, where he served until July 2008, when the state supreme court tapped him for a new opening as a Hinds County special circuit court judge. In that post, Priester hears drug and violent crime cases investigated by the Jackson Enforcement Team, a federally funded task force.

What's the logic of creating a task force like JET?
It allows law enforcement to, in a cooperative manner, do a lot of things and get into a lot of places (where) I think oftentimes, agencies will say, "This is my turf." The creation of the judicial component allows us to process those crimes much quicker.

For example, I believe it was last August, we had a lady, a 65-year-old lady from Clinton, who was the victim of a home invasion. Four people broke down her door, pistol-whipped her, pulled her by her hair throughout her house, making her point out her valuables. Clinton police apprehended those folks within a couple of weeks. By February or March, all four of those people had been sentenced from the JET court.

How does that compare to the normal circuit docket?
I think normally you would probably be looking at at least a year, if not two years, to get something like that to trial.

Wouldn't county court be less exciting than JET court?
I think the attraction, for me, is that you do hear civil cases. You have the possibility of hearing criminal cases, if appointed by the senior circuit judge. And if I'm not mistaken, county court cleared 3,000 more cases than did circuit court last year, which means to me that you have an opportunity to impact more lives in county court. ... After five years of being an appointed judge, it was time for me to offer myself up for election.

In other words, see whether the people want to keep you?
That's one way of putting it.

You've mentioned the possibility of seeing criminal cases. What kind of assignment system would you like to see at county court?
Personally, I would like to at least be considered for some involvement in the youth court, based on my background ... with troubled youth, but I have no problem with the mechanism of the senior judge making assignments.

What other kinds of things could change in county court that would be positive?
This doesn't apply only to county court: I think we, as an entire court—we've got to start looking at sentencing. That's not to say that every judge must sentence a case to the same amount. I don't want to take the discretion vested in trial judges away, and I certainly don't want to go to the federal system of sentencing guidelines, but I think we need the opportunity to come together and discuss. What types of things are we looking at when we sentence? ... I guess what I'm talking about is increased communication among the sitting judges.

How did you know Frank Melton?
Frank and I actually were friends for over 20 years. ... We did some work for WLBT, when I was at my brother-in-law (Frank Stimley)'s firm. That was about the time he started getting actively involved with the young people in the community, and I had the opportunity of representing some of the young folks he was working with. ... I handled a couple of aggravated assaults, just the whole gamut of things that young folks do that end them up in Youth Court.

How familiar were you with the more controversial parts of his administration?
I think I know what you're asking, and I have to say, Frank was a friend of mine, as well as a client, for a very long time. I think the lesson here is that one has to stay focused on the means as well as the ends. And that's what I have taken away from Frank's tenure.

Meaning that his means and his ends didn't match up?
Well, that's kind of all I feel comfortable saying about Frank. I'll put it this way, my mama told me, "Don't talk ill of the dead."