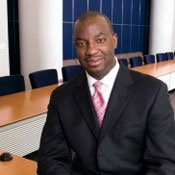 Meyers served as president of Norfolk State from 2006 until her resignation in June. During her tenure, the school's freshmen enrollment increased 19 percent in one year. The university opened an honors college, additional degree programs, and a school of graduate and professional studies.

Before coming to Norfolk State, Meyers served as a professor, provost and vice chancellor for academic affairs at North Carolina Agricultural and Technical State University.

Meyers resigned in June at the end of the fourth year of a five-year contract. In November 2009, she was a finalist for the president's position at Morgan State University. According to the Norfolk Virginian-Pilot, she submitted her resignation from Norfolk State that same month with the understanding that it would not be publicized until 2010.

The candidates will attend public listening sessions at their respective campuses Nov. 30 and Dec. 1 before the board takes a final vote on their selection. Brown will visit Alcorn State at 8 a.m. on Nov. 30. and state college Board of Trustees will hold a final vote on his appointment, at 3 p.m. Meyers' Dec. 1 visit to JSU will start with listening sessions at 8 a.m. in the JSU Student Center and end with a board meeting at 3 p.m., also in the Student Center.