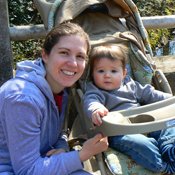 Kelly Bryan Smith and her son, Simon, enjoy the benefits of breastfeeding.

Becoming a mother was quite different from what I expected. I anticipated a long labor with special breathing, baths, books, walks, games, massages and music as distractions. Instead, I had a short, intense labor. Mostly, I had a wet washcloth over my face and an epidural in my back, and was telling my husband and mother to stop talking or touching me.

I should have known that my visions of my newborn starting to breastfeed without any issues might also deviate from reality.

As determined as I was, I had no idea how hard it would be to get started. Just a few hours after giving birth, I was lying in my hospital bed in a state of bliss, admiring the perfect little person I somehow managed to grow for nine months. Then the nurse came over.

"It's probably about time to get some food in that baby's belly, mom!" she said, cheerfully.

My husband helped prop me upright with my favorite pale green pillows from home. He positioned our 7-pound boy on the safari-print nursing pillow. The nurse instructed me in the proper way to hold the baby and to ambush his tiny mouth with my nipple.

I'll spare you the details, but let's just say that our nursing relationship did not get off to the smoothest start. Baby Simon and I both cried as we tried to figure out how to get him to latch on so that he could nurse without causing me to cry out in pain and frustration.

Before I knew it—and far before I felt ready—it was time to go home. Despite lots of help from the nurses and the neonatologist and the hospital lactation consultant, nursing was still rockier than the heavily potholed roads we winced over as we drove Simon home.

The next morning, I realized that I had suddenly grown two boulders on my chest. My milk had come in. Something had to give. I needed to get that milk out of my breasts and into my baby before I exploded.

My mom ran out to rent a breast pump, since the non-hospital-grade one that a friend loaned me did nothing to relieve my engorgement and extract my milk. It was slow going at first, but I started to love my big blue breast pump almost as much as my infant son. For the first few weeks of Simon's life, he flourished with our love and care, and with my breast milk in a bottle.

About six weeks later, with the help of friends, family and a lactation consultant, Simon and I finally managed to nurse without causing either one of us too much distress. We transitioned from bottle to nipple shield and straight to the breast at last.

When he was 8 weeks old, I started to work full-time. The transition to pumping at work was pretty painless, since I had become a pro in the early days of my son's life. I pumped at work, refrigerated my milk and took it in bottles to day care. I pumped extra and froze it for emergencies. When I picked up Simon after work, we reconnected with a long nursing session on the couch.

Of course, pumping at work takes on an interesting dimension when one works as a teacher. I pumped in my darkened classroom with a table blocking my unlockable door and a curtain pulled over my windows. At first, I had a little trouble relaxing. Staring at pictures of my baby, talking to my husband on the phone, and smelling a onesie that Simon had worn helped stimulate my milk.

Before long, my body got into a rhythm. I stopped having embarrassing milk leaks. I was able to pump quickly and then get to meetings and such. I was able to pump even in moments of panic when a student would come looking for me and try to open the door. If I had a dollar for every time I shouted, "I'll be out in 10 minutes!" I could probably buy my own hospital-grade breast pump.

I did not broadcast my milk-making, but it was helpful to have a few coworkers in the loop; they could cover for me if I was late for a meeting, or would understand if I needed someone to watch my students for 15 minutes if we had a schedule change.

Now my son is 9 months old, and I have continued to breastfeed him despite a full-time job, a run-in with swine flu and four simultaneous baby teeth in the last month. Simon only wants to nurse a few times a day now as he ventures into the world of Cheerios and green beans and mangoes, but it is still an amazing time to bond. I love holding his warm little body as he slowly stops his incessant squirming and starts drifting off toward sleep. I am thrilled that I can still give him the most perfect baby food and soothe even his most frustrated moments. With determination and patience and support, I was able to make breastfeeding work for us.

Getting Started
1. Start preparing your nipples with Lansinoh ointment several weeks before your baby is born.
2. Get fitted for a nursing bra.
3. Stock up on washable cotton breast pads.
4. Eat right and stay hydrated after your baby is born.
5. Avoid caffeine or foods that irritate baby's stomach.
6. Get enough rest.
7. Relax and enjoy bonding.
8. Don't be afraid to get professional help.