One Lake Instead of Two? 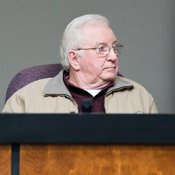 The Rankin-Hinds Pearl River Flood and Drainage Control District Levee Board is pressing the U.S. Army Corps of Engineers to take seriously a lake plan to coincide with a Corps-preferred levee expansion the board approved in December.

Levee Board President Billy Orr submitted a March 8 letter to the Corps pointing out that the Corps' intent, so far, does not address the Levee Board's desire for a smaller lake to be built between the expanded levees the board approved last year.

The board also explained in its March 8 letter that it wants the Corps to incorporate into the levee plan "access to the river, recreational features and development of tributaries, in particular, Town Creek."

The Levee Board opted for the Corps-endorsed levees-only plan over a billion-dollar Two Lakes plan, pushed by Jackson oilman John McGowan. The rejected plan would have affected 7,857 acres of wetland and hardwood forest. The board added a stipulation to its December agreement, however: that the Corps consider allowing a smaller 1,500-acre lake between the levees at a later date and to design modifications that would better accommodate a levee-girded lake.

Thus far, the Corps has refused to accommodate any suggestion of an impoundment. Corps Chief of Project Management Doug Kamien argued to the Levee Board last September that the Environmental Protection Agency's Executive Order 119900, created in 1977, directs federal agencies like the Corps to avoid direct or indirectly supporting any new construction that will destroy or modify wetlands like those along the Pearl River between Hinds and Rankin counties.

Corps spokesman Frank Worley says the Corps had not updated its opinion against any impoundment of the Pearl River since September. "As far as we know, Kamien's statement from last September still stands," Worley said.

But Orr's letter adds that the Water Resources Development Act of 2007 legally permits such an impoundment. Board attorney Trudy Allen pressed that assessment last year, arguing before the Corps at the September meeting that the act exempted a local lake plan from some environmental regulations.

Levee Board member and Two Lakes supporter Socrates Garrett said the Corps' final position on a lake plan is still unclear, but he added that the board would have to press its desire if any lake plan were to be a reality.

"The Levee Board is prepared to do that, but we always hope that the spirit of cooperation will prevail, and we can negotiate our way through this. We certainly don't want an adversary in this," Garrett said.

At last week's meeting, Mississippi Engineering Group Inc. acted upon a 2006 request by the LeFleur Lakes Development Foundation and submitted to the Levee Board a 28-page draft of its economic- impact report on a smaller Lower Lake Plan.

The Levee Board formed the LeFleur Lakes Development Foundation in 2005 to investigate the feasibility of McGowan's Two Lakes plan—then called LeFleur Lakes. But the report reveals that the group embraced the more modest ideas of renowned new urbanism architect Andres Duany, who dismissed the McGowan plan at a 2007 charrette because of its cost—and the unlikelihood of the plan surviving many environmental suits, saying it couldn't happen in his lifetime.

The smaller lower lake plan does not carry the significant cost and environmental impact of the McGowan plan, but the lake would still face environmental opposition, since its design calls for the inundation of a large portion of LeFleur's Bluff Park, including the Mayes Lake campgrounds.

The report anticipates the construction of the lower lake plan to cost $605 million, including $50 million for land acquisition, financed by a district expansion and subsequent property tax increases in the area.

The report expects taxpayers to pay $13.8 million annually for debt service on a 30-year, $200 million bond issue at 5.5 percent interest. However, the federal cost-share payment stops at $133 million, so the district must finance a total of $472 million, much of which taxpayers would fund.

Didn't know the Foundation was a creature of the Levee Board...interesting. Cannot stomach any more usurping of park lands and wetlands. If the Town Creek area is taken via eminent domain you will displace sex workers and mechanics for a basin that might serve to control flooding and enhance the Old Capitol Green project. The main thing for me is that the levees get done, buy out some property in the floodplain, and remove river obstructions. You might need to buy a pump, create auxiliary basins or engineer a floodgate on Town Creek which is far cheaper for taxpayers and easier on the wetlands & wildlife than impounding the river.

I wonder if the lake proponents have ever hiked along the Pearl River north of Lakeland Drive on a beautiful fall day. It is the closest thing to a primordial forest I've ever seen in the Mid-South, it is absolutely gorgeous and instills a sense of calm I wish I could find every day. Do they realize what they wish to destroy? On that note, has anyone ever considered turning the Pearl River wetlands into an eco-tourism attraction? There aren't many river wetlands like these in proximity to the services it takes to support tourism and since we have relatively clean air and lower than average light pollution it could be a (small) ticket for success for the Pearl.

A former city planner wanted the city to buy up the riparian lands and use it for recreation...NE residents are very fearful of public access on the river. Marginal lands or wetlands are prime recreation areas in city planning elsewhere. Golf courses and tennis courts should be the very things in the floodplain not residences. Greenways could connect residential areas to the downtown if the city fathers would visit them in world-class cities.

I live in NE Jackson and I am not at all fearful of river access. I want river access. I want a trail to come right to my back yard (I live on a creek that feed the river). I want to see Mississippians riding bikes and walking. I want it more than flood protection and I want flood protection very badly. But at the end of the day, I'd rather have a beautiful quality of life and healthy lifestyle. I don't want commercial development on the water where there is now a prime habitat for wildlife. If you want that, do a riverwalk downtown where it's urban already. Only low impact development should be planned near the Pearl - canoe rentals, maybe a sandwich shop and bike rentals. If you dam up and build up around the river too much the water quality will degrade and it will become a cesspool. Read up on urban lakes and stormwater management. Environmental regs are there for a reason.

Read up on urban lakes and stormwater management. Environmental regs are there for a reason. Well said, Gwilly. Sadly, it becomes apparent when talking to many people who support Two Lakes that they have not "read up" on these issues. Please, all, do your homework. We're giving you a lot of information here that you won't get anywhere else because the rest of the media are either too lazy to research the issue or are being used as tools to promote the Two Lakes project. As a community, we can and must do better than thinking something sounds good and viable because someone says it does.

I would love to have river access and recreational development on the Pearl north of Lakeland Drive as well. But unless some measure of water-level control is taken (as with the smaller lake plan) the rise and fall of the water level in that section of the Pearl changes way too drastically and upredictably to accomodate any sort of golf courses, parks, boat launches, developed hiking/biking trails, inner-tube/canoe rentals, etc...all of which would be great...BUT, would also be entirely dependent on a consistent water level. Nobody is going to build golf courses, or a wetlands boardwalk, or provide canoe rentals, if their entire operation is underwater half the year. Plus their are two big, influential hunt clubs that would fight this tooth and nail.

This is why people go "up river" instead of down...you can have campgrounds, garbage cans, volley ball courts, primitive bathrooms, etc when the water level is pretty much consistent within a few feet.