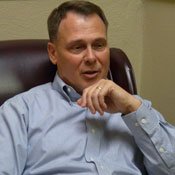 District 4 Supervisor Phil Fisher is a "Reagan Conservative" who believes that our government is too big.

Hinds County Supervisor Phil Fisher accused his fellow supervisors today of evading public scrutiny by relegating two potentially inflammatory decisions to executive session. In a closed session during its meeting this morning, the Board of Supervisors voted 3-2 to fire County Administrator Vern Gavin. Supervisors also rejected a proposal from Fisher to dissolve the county's agreement with the Mississippi Youth Justice Project, a juvenile-justice watchdog group.

"I think we're hiding from something here," Fisher said, insisting that he was comfortable discussing the matter in the open session.

A Youth Justice Project employee allegedly brought a cell phone into the Hinds County Youth Detention Center and allowed a detainee to make calls, Fisher told the Jackson Free Press after the meeting. Juveniles at the facility, also known as Henley-Young, are not permitted to have or use cell phones.

"This is a misdemeanor, punishable by a year in jail and a $1,000 fine," Fisher said. "More important, I think it breaks the spirit of the agreement that a majority of this board made with this particular organization."

Fisher opposed the board's November 2009 decision to sign a memorandum of understanding with the Youth Justice Project, which advocates for juvenile-justice reform in the state. The agreement came after visits from the MYJP and a state monitoring agency found numerous causes for concern at the Hinds County Youth Detention Center, also called Henley-Young. The memorandum of understanding called on the county to implement a series of reforms, including a lower staff-to-detainee ratio. Fisher has said that an advocacy group should not be allowed to place such demands on government.

Supervisor Peggy Calhoun said that the alleged violation had no bearing on the merits of the county's agreement with MYJP.

"The employee violating state statute is totally different from the memorandum of understanding, Calhoun said. "The agreement is a separate issue."
At today's meeting, Board of Supervisors President Robert Graham announced, on the recommendation of Board Attorney Crystal Martin, that the board would consider Fisher's motion in executive session. Unlike Fisher's proposal concerning MYJP, Gavin's firing was not listed on the meeting agenda.

"It just landed there in the middle of the executive session, and we were off to the races," Fisher. "You're talking about someone's livelihood. To me, this warranted a lot more discussion, a lot more openness. I was flabbergasted when it came up."

Along with Supervisor George Smith, Fisher voted against Gavin's termination.

"Like everyone else, Mr. Gavin had his strong points and his weak points," Fisher said. "But I wasn't prepared to terminate someone's livelihood with the short notice that we had there. There's no paperwork, there's no series of events warning him, no counseling."

Calhoun, who voted in favor of termination, declined to comment on Gavin's firing, calling it a "personnel issue."

Ray Bryant, the county's current director of emergency medical services, will serve as interim county administrator while the board searches for a replacement.

Earlier in the meeting, the board approved funding three projects with bonds from the federal stimulus package. Supervisors unanimously approved Graham's motion to use $500,000 in federal Recovery Zone Economic Development bonds to purchase 21 emergency sirens. The board also voted unanimously to spend $900,000 from the same federal bond fund to build a new training and communications center for the Hinds County Sheriff's Department.

While he voted for Graham's two proposals, Supervisor George Smith also suggested that the board spend some of the remaining $1.1 million in the federal bond funds on projects that would more directly impact economic development in the county.

"We need a mixture of projects that will generate a revenue stream to pay these bonds back," Smith said.

Minutes later, though, Smith voted with a majority of the board to approve using the remaining $1.1 million to purchase and renovate a privately owned building at 499 South President Street for an expansion of the county's Justice Court. The Hinds County Public Defender's Office currently rents space in the building. justice court Judge Clyde Chapman told supervisors that the Justice Court's current location has crowded hallways and only one courtroom. A larger space would allow Justice Court judges to hear more cases and thus bring more revenue, in the form of fines, to the county, Chapman said.

"I don't believe we need it," said Fisher, who cast the lone vote against the purchase. "It's a privately owned building, so we're also taking the building off the tax roll in Jackson."