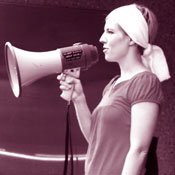 We asked JFP readers and domestic-abuse victims to share their stories. Here are a couple of the many responses we received.

I always thought I was too strong, smart and grounded to be caught up in the cycle of domestic violence, but here I am. The funny thing is, while I was with my abuser, I defended him. I lied to myself and made excuse after excuse for his behavior, not because I condoned it, but because I didn't understand the subtleties of domestic violence. I believed domestic violence occurred when a man used his fists to beat down a woman when they were fighting. I even stopped seeing a therapist who told me I was in an abusive relationship because my partner's abuse didn't fit my narrow view of abuse.

No one could help or persuade me; I was in denial about my situation. Because my partner was mentally and emotionally ill, it was difficult for me to label his violent behavior and need to exert control as abusive. I was strangled, corralled when I tried to flee his rages, and even thrown and pinned to the ground by the man I loved. It was just as demeaning and emotionally damaging as being hit with fists.

In the years we lived together, I became a shell of my former self, and suffered from acute anxiety. I started sleeping with clenched fists. Last year I volunteered to help with the Chick Ball but after my last fight with my then-partner, I could not make myself show up for meetings; it felt like a lie. I had everyone fooled into thinking everything was OK, but during the last fight he backed me into the wall at such a force that I left a body-sized hole in our sheet rock. Then he twisted my arm until I was on the floor with him standing over me with his foot on my chest.

I am not sure what would have happened next if our puppy hadn't cowered and emptied his bladder at this show of force. Something about the puppy's reaction seemed to snap him out of it.

After the incident, he left for active military duty. Aside from a few visits to collect his belongings, I never saw him again.

I was an emotional mess, and I did not understand it all. Luckily, I had support. After seeing the hole my body left in the sheet rock, my sister friend, Deirdra (a longtime Chick Ball volunteer), insisted I call the Center for Violence Prevention in Pearl. It had been a few months since the incident, and I felt foolish for calling, but after talking with the counselor, it began to dawn on me what had happened to me.

Over the last year I have begun remembering things that I had blocked out: being knocked down and my head hitting the porcelain on the bathroom commode, having floor fans hurled down steps at me, being strangled on multiple occasions, my keys and cell phone taken from me when I tried to leave the house to get to safety.

I am one of the lucky ones. My abuser went on to a new relationship, and I never have to see him again. What about the ones who aren't as fortunate?

I can testify: if it happened to me, it can happen to anyone. So watch over your mothers, daughters, sisters and friends. One in four women have been victims of some form of domestic violence; more than three women and one man are murdered by their intimate partners in this country every day. Domestic violence is not limited to one group, one sex or one age. You would probably be surprised at the people you know who have been affected by it.

I didn't realize I was a victim of abuse until much later. He didn't beat me, but treated me in ways I will never understand. He isolated me from my friends, screamed, grabbed, pushed and threatened his life if I were to leave.

I thought he would kill me, himself and anyone else that got in the way if I were to finally not take him back. He had shown that this rage was inside.

We were 18. I couldn't get out, and I was too inexperienced to truly see what was going on. Who can have those feelings so young? Luckily, he took it too far one day in front my friends with a cop nearby, and the embarrassment and restraining order put on him after his night in jail worked.

I didn't really break down until it was over, because if he saw that I was sad, it just made him crazy. I still know where he is and avoid him at all costs. I will never forget him.

I was young, and I have been lucky to have lots of positive and valuable opportunities, so I bounced back and learned a lot of lessons early on. Not everyone is this lucky, and my heart goes out to them.

George, while I don't deny that men are also the victims of domestic violence, the research I've done suggests the number for male victims is somewhere between 3 percent and 30 percent, with most studies showing about 15 percent. The batterer's intervention program at the Center for Violence Prevention bear out those statistics: about 15 percent of batterers in the program are females. Regardless of the statistics (which are only ever a snapshot and are highly unreliable for domestic violence as a whole for a number of reasons), it's not that the JFP is ignoring the problem; it is, however, one that men tend not to talk about as openly as women. We asked for victims to speak out. We heard from women. The story I wrote about the batterer's intervention program leads with a story told by a woman in the BIP program. The JFP is doing a benefit for the Center for Violence Prevention, which is a women's shelter. If you're aware of a program for male abuse victims in the area, I'll be happy to look into it. If there isn't one, perhaps you should start one.

Also, men who suffer from domestic abuse tend not to have injuries as severe that women suffer. A 5'2", 110-lb. woman striking someone doesn't carry the same force as from a 6'2", 220-lb. man.

If there isn't system in place that assists abusive men or men who have been abused, George, and you are willing to start one, as Ronni has suggested, I'd be more than willing to help you do it. Abuse is abuse, whether done to a man or a woman!