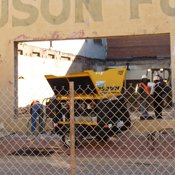 The first block of Farish Street remains closed this month as construction workers gut buildings in preparation for entertainment venues this fall.

The first block of Jackson's Farish Street Entertainment District will be ready for new occupants by September of this year, Brad "Kamikaze" Franklin announced Tuesday. Franklin, a local musician and investor in Farish Street, also heads the public-relations department of Watkins Development, LLC.

"We're not big on rolling out press conferences, because the people in this neighborhood have heard bogus press announcements before on what's about to happen on Farish Street, and they're kind of numb to it," Franklin said. "We want to prove what we're doing through our actions, and right now our actions are proving that we've started construction, and we plan to be done with the first block between Amite Street and Griffith Street by September of this year."

Construction is underway, as workers gut the proposed home of the Red Rooster Bar and Restaurant on the corner of Farish and Amite streets, after more than a decade of delay and under the guidance of Performa Entertainment. Performa, which transformed Memphis' Beale Street, vowed to turn Farish Street into an resort district featuring entertainment and music venues, but suffered countless delays from construction setbacks and local banks' unwillingness to invest in the Farish Street project.

Performa suffered even heavier financial loss during the last two years as the economy crashed, and the company proved incapable of continuing the Farish Street Project. Developer David Watkinsthe personality behind the recent renovation of the King Edward Hotel and the ongoing renovation of the Standard Life building into an elegant stack of condominiumsstepped in to continue Performa's vision. Watkins argued that the success of the newly renovated Hilton Garden Inn (formerly the King Edward) and the Standard Life condominiums depended, in part, on the success of Farish Street.

Franklin said the bricks are coming together, and the new owners of the businesses have committed to the development, which could eventually offer up to 680 new jobs.

The west side of the street will sport a B.B. King's Restaurant and Blues Club as an anchor feature. Franklin said the building directly beside it will be a "(New Orleans) Bourbon Street-type bar" called Tablet's. Design plans also call for an open-air amphitheater featuring entertainment including plays, recitals, symphonic performances and other shows. A Wet Willie's daiquiri bar will border the amphitheater, and at the end of the first block will be what Franklin describes as "a new soul bar likely containing an element of comedy." The soul bar is a step down from the Funny Bone Comedy Club originally envisioned by Performa for that spot, but developers fear a stand-alone comedy club may not fare well in the local environment and want to think conservatively in terms of initial businesses.

Developers have plans for the other side of the street fit for the resort status the Jackson City Council awarded the district in 2004a status similar to that of Beale Street and New Orleans' French Quarter, which allows patrons to stagger from one bar to another with open containers filled with alcohol. The Red Rooster Restaurant will sit directly across from the B.B. King Restaurant. Developers plan to place an arts center on the other side of that, although the arts center is a complicated endeavor containing numerous galleries and individual vending areas for art, which will likely see the light of day during the second phase of the Farish Street development.

"We want this to be used by folks who paint, and (by) poets and other artists," Franklin told a crowd of about 30 who heard the presentation from the seats of the recently renovated Alamo Theater on Farish Street. "We want to give them an area to ply their trade. The way we envision the arts center, you'll be able to look in the ground floor windows and see their art, and you will be able to buy their art."

Franklin said the other side of the arts center will host "a juke joint restaurant," co-owned by Jackson contractor and musician Frank Dixon, who is currently involved in the construction of Jackson Public Schools' new North Jackson middle school. Systems Consultants Associates, Systems IT, and Systems Electro Coating CEO Bill Cooley is the co-owner of the juke joint.

A sports bar in the vein of a Dave & Buster's restaurant will adjoin the other side of the as-of-yet-unnamed music bar. Franklin describes the business as "a Chuck E. Cheese's geared for adults," run by the former owners of Last Call Sports Barthe site of some of the best chili cheese fries in the city of Jackson, before the place closed down last year.

Long-time Farish Street restaurant Big Apple Inn will move up to occupy the building directly beside the Dave & Buster's knock-off, while the other side of Big Apple will contain a reincarnation of the popular Subway Lounge, formerly situated along the Jackson Metro Parkway.

"(Subway Lounge owner) Jimmy King just had surgery, and said he wouldn't be up to being inside the facility every day, but he plans to come down as often as he can," Franklin said, referring to the business, which will sit directly across the street from F. Jones Corner.

Franklin said F. Jones Corner, which opened only a few months ago, has manifested as a herald for development on the first block of the district.

"You can't park on this block on Friday and Saturday nights down here because of F. Jones. We could not have scripted them to be doing any better than they have, and they've actually been a catalyst for some of the development down here," Franklin said.

"The way we see it, the more the better," Dillon told the Jackson Free Press. "We think the other businesses will be a draw for even more customers for us. We can't argue with that."

One member of the audience, Neal Pullen, said he was worried about security on Farish Street.

"The opinion outside the city is that this area is a problem area when it comes to crime, and I'd like to know how you intend to fight against that image?" Pullen asked.

Franklin said the district will contain a new police precinct featuring 15 police officers, who will "walk around, ride Segways, and make themselves visible all hours of the day and night," to promote the image of safety.

Downtown Jackson Partners President Ben Allen remarked recently that the Downtown district remains one of the safest districts in the city, according to police records, while Franklin said he walks back and forth from his office at Union Station to construction sites on Farish Street without any crime issue.

"Still," he said, "one serious crime down here at this point in development could kill the whole project. We know this, so we're going to be working extra hard to make sure that never happens."

I saw Kaze on the news this A.M. crowing with the roosters about this. Looking good Man! A little grey in the beard but looking good!

Glad to see some progress being made. BTW, I saw Kaze the other day, and he does look great. In addition, I have way more gray hair than he does. :)

I saw Kaze on TV last night in his suit. But it's wonderful to see something actually happen down there. I figured something was going on when I saw Farish being fenced off at Amite Street before Christmas.

This is what im talking about getting it done,, i think watkins deserves to have a lot things named in his honor.

now can we get the civil rights museum downtown.

NewJackson- isn't it being built a Tougaloo a done deal? That's why they are putting in the new exit from I55 to Tougaloo, isn't it?

wrong and wrong BubbaT, i believe the new exit was planned before the civil rights museum was even brought up. Tougaloo cant come up with the funding and downtown Jackson has a broader base of support(financial) for making the museum happen downtown. I dont vote republican but i like the posturing by Phil Bryant, he is trying to show people he supports Jackson's future. should have heard him at the King Edward ribbon cutting.

Newjack, do I need to get with LW and Queen and ride by to stop you from bad mouthing Tougaloo College? We got the money. The Civil Rights Museum will be at Tougaloo. Believe that! I'll see you there. Be there and be square.

I am soooooo ready!!! Although I admit I was pissed when I tried to get to Peaches last week! lol

what is the new exit on 55 you are speaking about?

As for David Watkins... I grew up with the Watkins family (David Jr. is one of my 2 or 3 best friends from high school, still). I've known them since I was ten years old. The day that I heard David was leading the King Edward effort was the day I began to believe that it might actually happen. He is one of the best people I know, along with the rest of his family, and he really does things from the heart. We're seeing the results now.

This is really progressive news to hear about Farish Street. As for the Civil Rights museum I believe it would serve The City of Jackson and Tougaloo better if it was located downtown.. lf it was a joint effort by Tougaloo, it would give the school more exposure and enhance the cultural identity of our downtown district. Everybody wins.