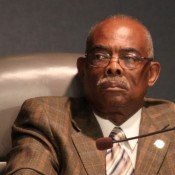 The Hinds County Board of Supervisors consider better sirens.

The Hinds County Election Commission did not follow required hiring procedures when it issued a contract to a voting machine technician, county supervisors learned today.

In a series of allegations about the commission's dysfunction that she made before the November general election Democratic Election Commissioner Bobbie Graves criticized the hiring of Pat Wilson. At today's county Board of Supervisors meeting, board attorney Crystal Martin said that the Election Commission never submitted Wilson's most recent contract, which dates back to December 2009, to the board for approval. Moreover, Martin said, only one commissioner, Republican Marilyn Avery, signed the contract, which is a departure from standard practice.

Based on minutes from the board and the commission, Wilson's contract with the Election Commission is "probably not a binding contract," Martin said.

Martin added that her partial review of the commission's minutes had not turned up evidence of a formal meeting to approve Wilson's contract, raising the possibility that the hiring did not follow the commission's hiring procedures either. The commission has not provided all of its minutes for review, and Martin said that she expects to receive more this week. She recommended that the Election Commission meet promptly to formally authorize Wilson's contract and submit it to the Board of Supervisors.

At the board's Nov. 1 meeting, Graves asked supervisors to fire Wilson for allegedly refusing to perform maintenance on voting machines while she was present.
Republican Election Commissioner Connie Cochran maintained at the same meeting that Graves attempted to take over Wilson's responsibilities.

Martin and County Administrator Carmen Davis are also investigating Graves' allegations that she and Commissioner Jermal Clark have received less training than the commission's two Republican members and Democratic Chairwoman Lelia Rhodes. That investigation will not be complete until the board's first meeting in February, Martin said.

Rhodes, Avery and Cochran also submitted a request to the board to purchase 300 used electronic voting machines for $375 each. The $112,500 would have come from federal Help America Vote Act funds, of which the county has over $1 million remaining. Clark and Graves opposed the machines because they were used.

Rhodes pleaded with the board to respect the commissioners' recommendation.
"We have done our investigation, and we do say these machines are reputable," Rhodes said. "We only ask for your trust."

A vote on appointing Smith the board president for 2011 passed unanimously. Calhoun teasingly asked Anderson, who currently serves as vice-president, why he was departing from custom in not taking the president's position.

"We had an agreement that Mr. George Smith would be president," Anderson said.

"I guess I was not aware of that agreement," Calhoun responded, to laughter.

The board declined to enter executive session at the end of today's meeting. Yesterday, The Clarion-Ledger reported that the Mississippi Ethics Commission agreed with the paper's ethics complaint concerning an Open Meetings Act violation by the board. The act's exemptions for personnel matters did not cover the board's Oct. 18 executive session vote on a health-insurance policy for county employees, the Ethics Commission found.

Smith said that he had placed a discussion of the county's detention center on the board's agenda to address "health problems," but his motion to consider entering executive session died without a second.

"I'll talk to board members about it," Smith said after the motion failed.