JFP Elephants of the Day: Rosie and Juno 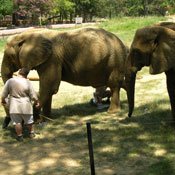 Jackson Zoo elephants Rosie and Juno will be relocated to the Nashville Zoo at the end of this year.

Rosie and Juno, two African elephants that have lived at the Jackson Zoo for more than two decades, will soon find new homes at the Nashville Zoo at the end of this year, the Jackson Zoo announced today.

The Jackson Zoo Board of Directors' decision comes after the Association of Zoos and Aquariums issued a requirement stating that at least three elephants need to be housed at a zoo's exhibit. The cost to house an additional elephant and construct a new exhibit would cost $8 or $9 million, which is beyond the zoo's current resources, Jackson Zoo spokeswoman Rosemary Jalink told the Jackson Free Press today.

"We have two elephants--one is 31 and the other is 39 and a half. The average life span for females is just over 40 years," Jalink said. "If something should happen to one of them, it would be a severely traumatic event for the other animal to be left by itself. They are herd animals and bond with their herd."

Jalink said the zoo does not have the financial resources to meet the new AZA requirement, but hopes that will change in the future. She said that it was a challenge for the zoo to raise $1.2 million for a new tiger exhibit that opened earlier this spring. The zoo is also seeking reaccreditation from AZA in 2011 and would likely not pass with the two elephants.

"Now more than ever, the Jackson Zoo needs the support of our community," Zoo Board of Directors President Davis Frye said in a statement.  "I encourage everyone to visit the Zoo to say goodbye to Juno and Rosie, and to experience all of the positive qualities that the Zoo has to offer.  It is only through such support that the Jackson Zoo can continue its important mission of educating our children and our community about wildlife and conservation."

Juno came to the Jackson Zoo in 1982 and Rosie came in 1977. The elephants weigh 6,000 pounds each and eat four bales of hay and 25 pounds of pellet food per day. At the Nashville Zoo, the elephants will integrate with two other elephants and have access to a large pool.