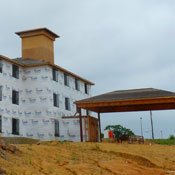 Jackson-based developers of the Sleep Inn say they have acquired financing to complete construction by September.

After a brief hiatus, construction on the Sleep Inn downtown is set to resume in the next two weeks and finish in time for a Sept. 1 opening. Robert Gibbs, a member of the Jackson-based LEAD Group LLC, which is developing the hotel, told the Jackson Free Press today that his group has acquired construction financing to finish the $5 million project.

Work on the building stopped early this year when Zion, the Utah bank that had previously funded the project, refused to extend financing.

"The bank had a condition of their financing that required the hotel to be completed by 2009," Gibbs said. "When we knew that we could not finish it by then, we asked them to extend the financing. Because of the financial crisis, they refused to do so. So we ended up having to stop the construction shortly after that. We financed the construction through our own finances up until the point where we couldn't afford to do it anymore."

The new construction financing will come from another out-of-state bank, Gibbs said.

"I will say that I'm disappointed that more local financial institutions would not come to bat for local business people," Gibbs said. "It's going to be a great project for the entire city of Jackson, also for downtown and for West Jackson. It's going to be a connector for downtown Jackson and Jackson State (University). Unfortunately our local banking institutions didn't have that foresight."

The hotel, located between Pearl and Pascagoula streets near the Terry Road roundabout and Gallatin Street, is roughly one-third complete, Gibbs said. The building's frame, wrapped in Tyvek, is already finished, along with plumbing and electrical, but the interior, stucco facade and parking lot all remain to be done. Gibbs said that he expects construction to wrap up within 120 days.

After that, the LEAD Group, which consists of 12 African American investors, will turn its attention to a row of stores located behind the hotel, on Pascagoula Street, which include a bridal store and a t-shirt shop, along with several vacant storefronts.

"Our intention is to modernize them and attract more businesses to them," Gibbs said. "If the hotel is as successful as we think it may be, then some of us in our group have even wider visions for some of those storefronts."

The Sleep Inn should be considered progress because it is the first project in the downtown development to be done by local black citizens. Black folks have for the most part been shut out of the development downtown, having only a minor position in anything being done. This is newsworthy because it shows local black people getting involved in jackson's economic development ventures.

Drummin, go to the CL board with negative comments regarding anything Jackson. Wellington is right, this is a special day in Jackson. Anything opening is progress in this city, for far too long we've seen business close and leave for "fresh" land in the suburbs. With businesses constantly leaving the inner city, we've basically been told that our people aren't good enough for their businesses. Roads are being paved, businesses opening large and small, all this are positive signs and deserves a standing ovation. Sleep Inn is the first project in Downtown Development that is being developed by african american people. If you think back to 50 years ago, things like that couldn't have happened. This is special to alot of people and its special to me as a Jacksonian, because it is progress and yet you can't see that this holds dear to alot of people and you have to throw a negative comment regarding our city and development. Unbelievable.

I'm with everybody else. Any other day, a Sleep Inn wouldn't make headlines like a Hilton would, but given how many businesses have left over the years and how our critics like to beat us up, any significant business venture here is a big f***ing deal!