A Plan for Change 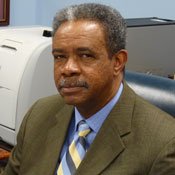 Otha Burton may be one of the newest appointees to the Jackson Public Schools board, but he is a veteran of city government. Burton served as chief administrative officer for Mayor Harvey Johnson Jr., during Johnson's first two terms as mayor, from 1999 through 2005. Before that, he worked in the city's Planning and Human and Cultural Services Departments. Burton is now associate dean of Jackson State University's Department of Urban and Regional Planning.

Behind his desk in the Universities Center, Burton has hung a small wooden plaque with a hand-carved inscription: "I love it when a plan comes together." Burton speaks deliberately, and you get the sense that his place on the school board is just the latest step in a well-ordered plan to make Jackson better.

How did you get involved in city government?
When I was working on (my) master's at Jackson State, I started working a part-time job with the city of Jackson in the Planning Department. … I worked my way up from a research assistant to, eventually, a senior planner. … When the city changed its form of government in 1985, I became one of the early department directors, when they reorganized from the commission to the mayor-council.

What happened then?
It has a lot to do with the evolution—not only in terms of government, but also the other kinds of cultural and social issues. The mayor and two (city) commissioners were elected at large and it was very difficult to ever get an African American elected. Prior to that time there was never a female elected to city government. Prior to the referendum, there had to be a whole lot of education, and the groundswell support for changing the form of government took several years. … We went from two commission members, elected citywide, to seven council members, elected by ward. We had the first elected African Americans as well as females. So that was quite a major shift.

What did you learn from your time as chief administrative officer?
There are public needs and challenges that transcend administration. The community needs to embrace those and hold whoever's in administration (accountable). ... You can't address our water needs in four years, in one administration. There needs to be a continuous commitment to do that. Our school system: To take it where we need it to be, first as a community, what do we want? How do we get there? We don't need to be just driven by national policy, whether it's No Child Left Behind or something else. Those are good, because they talk about connecting with the global and national agenda, but as all things local, that's where the rubber meets the road, we should be vigilant in terms of what we want and how to get it.

Is that something that you think Jackson hasn't always done?
We let those things that divide us divide us, whether it's race, whether it's income. And believe me, income does (divide), within racial groups, but also within sectors of the community.

What is the role of schools in addressing community divisions?
One, within the districts, parents need to be more engaged. Sometimes this is more of a challenge in the central city than in the suburbs. … Students are giving their best. Where are they going after graduation? Are we tracking that? Are we getting them through K-12 and somebody else picks up then? Do we know where they're going?

Do you want JPS to revise its tracking of graduates?
I'm so new at the position I can't say they're not. As a board member, I'd like to be very engaged in standards and policy and accountability. Not to get the lines blurred from the board to the district administration, but to forge a sense of mutual collaboration and respect, and also results. If that's the challenge for the districts in a central city, you see the suburbs often doing a better job of it.

What do you want to focus on as a board member?
I'd like to see where we are in terms of curriculum and managing resources. I want to make sure we've got the right structure in place. That means organization, management. If not, then let's get the best system in place. To get an idea of how recruiting is, in terms of getting the best principals and teachers. How are students placing not only in terms of state standards but also standards we have in place, the well roundedness of our kids. Do we know, other than some mathematical computation of what they should be? … We've got to set the "where we want to be."

Is there anything else you want say?
The only reason I'm still here is I'm very hopeful. I believe we can make Jackson a capital city that's representative of the kind of good governing and community we want it to be. When I look back at what was, it only reinforces what can be.