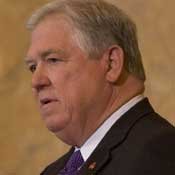 Gov. Haley Barbour declared today a "day of prayer" to commemorate the Mississippians who died in an April 20 explosion on a Gulf BP oil rig, but third generation ferry pilot and Ship Island Excursions CEO Louis Skrmetta suggested the state keep praying for relief from the damage still on the way.

"This goes beyond damage to the environment," Skrmetta said. "You won't believe the kind of danger the Mississippi Gulf Coast tourism and the seafood industry is in. Hurricane Katrina did serious damage by spilling hundreds of leaks from oil rigs in the Gulf that left the place a mess, but we've never seen anything like what's coming toward us this weekend."

The blasted Transocean Deepwater Horizon rig is leaking an estimated 42,000 gallons oil a day. The rig sank last week after an explosion and fire that burned more than 24 hours. Eleven of the 126-member crew is missing and possibly dead. The rig is located approximately 40 miles off the Louisiana Coast.

BP boats are attempting to corral the oil with barriers and are skimming the sticky ooze from the surface of the water, but Skrmetta said he is expecting strong south easterly winds this weekend, which he said spells trouble: "This means, starting Friday, this thing is going to turn directly our way, heading right for the Barrier islands."

More than 260 species of birds inhabit the Barrier islands, including skimmers, plovers and terns. Sanderlings also feed during their 8,000 mile trip between the Arctic and South America. Osprey, pelicans and bald eagles also inhabit the area, but the pelicans are beginning their nesting in the area within three weeks, according to Mark LaSalle, director of the Pascagoula River Audubon Center, in Moss Point.

"I've never personally experienced something this devastating before," LaSalle told the Jackson Free Press today. "Our main concern is that any oil hitting the beaches or marshes would impact the upcoming breeding season of a lot of birds. Many of them are already sitting out there. We have record numbers of pelicans getting ready for mating season. These birds are seabirds that depend on shrimp and fish, and the shrimp and fish immediately suffer from adding oil to the environment--and this is more oil than I've ever seen hit this area."
The seafood industry, in particular, is in a panic. Margerat Pettis, co-owner of D.L. Pettis & Son Seafood Shop, in Moss Point, said she expected the oyster industry to take huge losses if the oil made it all the way to the oyster reefs.

"This oil spill could put the industry in Mississippi completely out of business," Pettis said. "We've already been shutting down for most of the season because of all the bacterial infection in the oysters. It's been rough the whole year. My husband was born and raised on catching oysters, but we didn't even have oysters this Christmas. This thing here, this thing could kill what's left of the business."

Skrmetta said the spill could have serious implications for Barbour's attempt to expand oil and gas rigs drilling off the coast of Mississippi. Casino groups and members of the Gulf Coast tourism industry, including Skrmetta, joined environmentalists in 2005 to crush an effort by Barbour and the oil industry to open the barrier island federal park to drilling.

"In 2005, we wanted to get across the fact that this kind of thing is a catastrophe. It's going to be a wake-up call to the 'drill, baby, drill' proponents who think drilling is harmless and that the oil and gas industry has made such great strides in technology. People think the industry has perfect fail-safes on every rig, but this was a $700 million rig that had the best safeguards in place, and look what happened," Skrmetta said.

It's not like your car will run on pee, Michael.

If we are going to drill we must have adequate contingency plans in place. Did we not learn anything from the Exxon Valdez disaster in Alaska? Are we as a society willing to pay an extra 10% for gas in order to fund some kind of safety and rapid response system to be initiated? Even if we pay the higher price for gasoline, who should be responsible for maintaining the constant state of readiness needed to keep an effective emergency rapid response team in place? 1. The gasoline companies? (Think of the recent preventable mine disaster, in addition to the Exxon disaster) 2. The Federal civilian infrastructure? (Think of the TSA in terms of professionalism and readiness) 3. The Federal military infrastructure? (Think of the billions of dollars wasted in Iraq and the Corps of Engineers "Katrina Disaster)) The fact is all three entities have had problems so we must think what mind set do we want in charge. a) Maximize profit through constantly reducing quarterly costs (the private sector). b) Maximize worker benefits (the Federal civilian infrastructure). c) Set a mission, set goals, and accomplish the goals regardless of the cost (the Federal military infrastructure. All three approaches have pros and cons with the wild card being the Federal political infrastructure. Many of the private sector's failures can be traced to lack of political will to properly regulate and monitor and enforce laws, the result of camping finance electioneering and legislation. Many of the Federal civilian and military infrastructure failures can be traced to political shenanigans related to electioneering budget cuts or underfunding campaign rhetoric and opposition to effective legislation. The solution? I think that we can look to the Republican's effective "Contract With America" campaign that was long on lofty goals and promises but short on effective implementation. In other words thay said one thing, but not only did they do another thing, they did the exact opposite. How could anyone believe that tax cuts for the wealthy, which reduced revenue, provide more money for new or improved Federal oversight and enforcement? This might have worked at one time, when the US wealthy would invest back into the US economy, but now they are investing more and more overseas, to the detriment to the US economy and worker. The oldest recorded possible solution is found in the Bible. Let the populace re-agree that this is a nation founded and built on Judeo-Christian values and as Moses was instructed by his heathen father in law; let Moses, the high priest leader, find good men of fine character to lead the people in 10's,50's, 100's and 1,000's. Christ improved upon the Old Testament model by adding a high priest is no longer needed or desired in that we all are commissioned as leaders. Christ was all about personal faith and responsibility. And God saw that it was good.