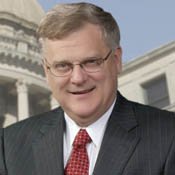 A senate resolution suspending a January legislative deadline for bills to be introduced, afforded Sen. Alan Nunnelee, R-Tupelo, the opportunity to include language to stop federal funds from funding voluntary abortion in the state, which the House passed today in an 80 to 33 vote. Several legislators, however, say the resolution is purely symbolic.

SC 702 is Nunnelee's fulfillment of a vow to counter the passage of national health-care reform in March. Nunnelee, who is also running for Congress, designed the bill, called the "federal abortion-mandate opt-out act," to give the state of Mississippi the power to reject federal money funneled into insurance exchanges for elective abortions.

The Patient Protection and Affordable Care Act, signed into law by President Barack Obama on March 23, creates insurance exchanges in which American citizens may purchase federally mandated insurance health-care coverage. The new law, which requires citizens to have health insurance either privately or through their job, also allows for the federal government to provide funds for co-pay with customers to help people in lower income brackets afford the new insurance. The federal money does not go directly to the policy-holder, but instead goes to their insurance company, reducing their payments.

Opponents nearly derailed the bill this year by arguing that the new law would allow the federal government to finance insurance coverage that could ultimately pay for policy-holders' elective abortions, effectively making taxpayers fund abortions.

Language in the new federal law states otherwise, however, with the bill permitting states to prohibit abortion coverage in federally qualified health plans offered through exchanges. It also prohibits federal funds from being used for abortion services, and even goes so far as to require a policy-holder to establish separate accounts for abortion services payments.

To garner support from anti-abortion Democrats in the House, Obama signed a March 24 executive order forbidding federal money for abortions.

"Following the recent enactment of the Patient Protection and Affordable Care Act (the "Act"), it is necessary to establish an adequate enforcement mechanism to ensure that Federal funds are not used for abortion services (except in cases of rape or incest, or when the life of the woman would be endangered), consistent with a longstanding Federal statutory restriction that is commonly known as the Hyde Amendment," Obama stated in the executive order. "The purpose of this order is to establish a comprehensive, government-wide set of policies and procedures to achieve this goal and to make certain that all relevant actors—federal officials, state officials (including insurance regulators) and health care providers—are aware of their responsibilities, new and old."

Rep. Herb Frierson, R-Poplarville, said he was unfamiliar with the details of the national health-care reform law, but said he believed state law already refused taxpayer money for elective abortion. The representative added, however, that he voted in favor of the resolution to "calm his constituents."

"(My constituents) expect me to vote that way, so I did, and there might have been a little politics in that as well," Frierson said.

Some Democrats in the House decried Nunnelee's bill as a waste of time.

"This is the same debate we had in Washington," Rep. George Flaggs, D-Vicksburg said. "The entire debate in Washington surrounded whether or not federal funds could supply abortion. It was a lie then. It's a lie now. But if you want to make a symbolic vote then do it, but that's all it is: a symbolic vote. It addresses nothing, it does nothing and it is going nowhere except the floor of the (Mississippi) Senate."

Other Democrats, like Rep. Dirk Dedeaux, D-Perkinston, said he would vote for SC 702 simply to get out of the way a bill that amounts to nothing more than a symbolic gesture.

The House adopted the resolution, containing many Democrats in the "yea" category, before an unnamed legislator held the bill on a motion to reconsider.

You ought to be jailed for spending taxpayers' resources on passing legislation that is meaningless. These guys, including Nunnelee, insult Mississippians by thinking we're so stupid and uninformed.

I bet they even took lunch breaks today!! Geez, can't believe they're wasting time like this!! Donna, I expect for you to be a bit firm next time someone whose cause you agree with (you're obviously not pro-choice) passes a resolution that enforces nothing, though I doubt I see that come to fruition.

RobbieR, you're clearly new to these parts. You should watch your assumptions. There are Democrats in the Legislature who will barely speak to me because I challenged their attempts at political-trick legislation that meant nothing. And you must not have read my angry rants against the Clinton administration and Janet Reno for writing briefs in favor of legislation (like the original Communications Decency Act, which they damn well knew was unconstitutional and would be turned back). Games are games, and I don't give a damn who plays them. We call 'em like and as we see 'em.

I am so tired of these politicians always thinking that they have to VOTE DUMB to appease the DUMB, THE HATE-FILLED, THE IGNORANT, THE ARROGANT, THE RICH, THE POWERFUL. Can anyone vote for or against because they know in their heart, mind and soul that the issue is either right or wrong; good or bad; for the people or against the people. Vote for an issue because YOU believe that it is right; not because it will win you brownie points, sniggles and giggles.