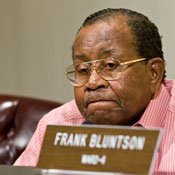 Members of the Jackson City Council passed a proposal by Council President Frank Bluntson to remove a petition requirement for the renaming of city streets or facilities. The current ordinance requires approval from 75 percent of property owners within 150 feet of a public facility or street are to approve changing a street or facility's name.

Ward 3 Councilman Kenneth Stokes, who chairs the council's Planning Committee, leads the council's effort on numerous name changes to streets and facilities around the city. One of Stokes' proposals suggests renaming a section of Pascagoula Street that connects the Jackson State University Parkway to Interstate 55 after controversial former Jackson Mayor Frank Melton. Stokes is working hard, he says, to rename two Jackson streets after Jackson resident Dr. Robert Smith and former Jim Hill High School Coach Fred Harris within two weeks, but to do so he must remove the time-consuming 75 percent petition requirement. Stokes said the senior class at Jim Hill wants to honor Harris, who died in July 2009, before graduation on May 30.

Ward 6 Councilman Tony Yarber said he was nervous about Bluntson's push to remove the requirement during the Monday work session.

"This is really going to cause a lot of issues when you tell people that the council will soon have a right to do what we want to do with their street or property ... and they don't have an opportunity to say anything until a public hearing," Yarber told Bluntson, while describing a public hearing as "a dog and pony show" that the council enacted "to say some kind of due process has been followed."

Yarber did not change his opinion by the Tuesday night meeting, calling the removal of the petition requirement the usurping of the democratic process.

Ward 1 Councilman Jeff Weill and Ward 7 Councilman Margaret Barrett-Simon agreed with Yarber and voted against removing the petition requirement last night. Ward 2 Councilman Chokwe Lumumba voted to remove the petition, however, arguing that the 75 percent requirement was "nothing more than a tool to prevent change." Lumumba's vote gave Bluntson a majority when combined with the votes of Stokes and Ward 5 Councilman Charles Tillman.

About 20 minutes after the vote, however, Mayor Harvey Johnson Jr. informed Bluntson that the ordinance change would not kick in for another month unless the council voted unanimously on the issue. Stokes complained that the 30-day wait would place Smith's and Harris' names too late for his preference, so Bluntson introduced a motion changing the 75-percent requirement on the petition to a 51-percent requirement, to garner a unanimous vote from other council members. The vote on Bluntson's motion required a unanimous vote as well, however--which Bluntson could not get from members who had opposed the petition removal 20 minutes earlier.

Lumumba said he would introduce an ordinance change in an upcoming meeting that would create a new 51-percent petition requirement, but as it stands, Stokes must wait a month before moving forward without the requirement of a 75-percent petition.

Absolutely not!!! When the man was alive he was constantly being investigated or indicted for some kind of irresponsible, crackpot behavior. Now that he's dead, everyone seems to want to make him into some kind of hero. I know he was under the delusion that he was Batman, but let's be honest: if he had lived, he would have been convicted of one or more crimes. Is this really the kind of person we want to permanently associate with the city of Jackson?

Donna, New York has solved this dilemma by allowing streets to be "dedicated" to a particular person, but for legal and postal issues the original name stays the same. The only expense is a second sign above the original street name. If you want to change the legal and postal name of a street I tend to think a 60% petition should be used to justify the redrawing of maps, issuing new stationary for businesses and the general confusion of the public, both residents and visitors, that will result during the transition.

It's amazing what these people consider to be a priority.

Comment came via e-mail: Every taxpayer in Jackson should have the right to reject the changing of names of streets and facilities in their neighborhoods. They should also have the right to object to the new names of streets and facilities. Have we become a dictatorship in Jackson? The City Council should represent the people of Jackson, not deny them their rights. Ollye Brown Shirley, Ph.D.

The bright side of this? Well, we can go before the council to have Ed Peters' street renamed Cedric Willis Boulevard and Bobby Delaughter's renamed to Cedric Willis Innocence Way? How about that? Any takers? A daily reminder of what they did, errrr what they didn't do.