A Different Tree for Downtown? 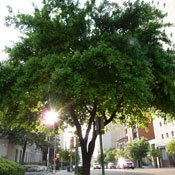 Capitol Street's live oaks have outgrown their usefulness, according to Downtown Jackson Partners.

The live oak trees lining Capitol Street have withstood decades of storms, but a new proposal calls for uprooting them in the name of progress. Downtown Jackson Partners is calling for the city to replace the large species with something smaller and less disruptive to street infrastructure.

A "consistent tree type" would be the best solution, Allen added.

The proposal has support from some business owners, like attorney Mike Malouf Sr. Malouf planted eight live oaks around his office on the corner of East Capitol and South President streets after purchasing it in 1977. By the late 1990s, he was noticing new cracks in the 100-year-old building. Eventually, Malouf decided to cut down the live oaks and replace them with crape myrtles. He hasn't had a problem since, he said.

DJP Associate Director John Gomez told the Jackson Free Press that the live oaks' broad canopies also interfere with street lighting at night. City workers had to trim back branches prior to Mal's St. Paddy's Parade last month to make room for the Kermit the Frog float. Gomez said that replacements for live oaks would be a part of plans for converting Capitol Street from one way to two way.

City spokesman Chris Mims said that the city is looking at Capitol Street's trees and studying ways to improve pedestrian access and lighting. "We just want to make sure that visitors and people who come downtown have proper lighting," Mims said.

Not all downtown business owners have had problems with live oaks. The Mayflower Café, which has been open since 1935, has yet to suffer any foundation problems from trees, said owner Jerry Kountouris.

"If they would keep (the live oaks) trimmed, they wouldn't affect the lighting, but they don't keep them trimmed back," Kountouris said. "Aesthetically, they do add to downtown. They give shade."

Still, Kountouris said he trusted the judgment of city officials and Downtown Jackson Partners. If the trees' roots are causing problems, he said, he could understand the need for replacements.

Craig Noone, whose restaurant, Parlor Market, will open in June one block east of the Mayflower, worried that cutting down all of Capitol Street's live oaks would drastically change the area's appearance. The tree in front of his restaurant has not posed a problem for many years, he said.

"I like the streets lined with live oaks," Noone said. "I just think it will take too long to get the beauty back."

Opinions are divided among professional architects. Steve Davis, a principal at downtown firm Canizaro Cawthon Davis, believes that crape myrtles or drake elms, both smaller, hardy species, would be a good replacement.

"It's a great tree if you've got a hundred-foot space for it to inhabit," Davis said of the live oaks. "What we've basically taken is that tree and jammed it into a 20-foot wide sidewalk."

The city could address many of the concerns about live oaks while still preserving the trees, Griffin said. If properly trimmed, live oaks can let light in, and adding steel reinforcements to concrete sidewalks can also prevent some of the cracking caused by tree roots. Mobile, Ala., has live oak trees lining many of its downtown streets, he noted. Most importantly, Griffin argued, the live oaks are now part of the downtown landscape.