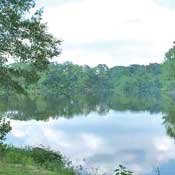 It becomes more clear with every Levee Board meeting that the strategy of hard-core Two Lakes development supporters is to stall any alternative plan that could render their plan moot—even though the local levee board has voted to pursue other options. That strategy is severely flawed.

It's been one effort after another in recent months to circumvent the authority of the Levee Board. There were blatant attempts in the Legislature to expand the Levee Board with more state appointees and to set up a state-appointed board to review its decisions, as well as one seemingly designed to take away authority from the folks who oversee the reservoir (the Two Lakes plan requires using the reservoir for flood control, although its board and every expert interviewed says it won't work). Those efforts—which the Two Lakes-at-any-cost Northside Sun made clear were about reviving Two Lakes—failed this session.

Then this week, the Levee Board showed up for its meeting to find out that Secretary of State Delbert Hosemann*—the long-time treasurer and a director of the Two Lakes Foundation—had listed the board (which gets no state funding) as a "state agency." Thus, the board's attorney has to research how to keep that apparent control attempt from moving forward.

Two Lakes supporter and Levee Board member Leland Speed also managed to delay the study of the "Lake 255" proposal (see page 6) that could be a way to get flood control, downtown development and avoid the massive environmental upheaval of Two Lakes.

But delay and win-at-any-cost seem to be the tunnel vision of some Two Lakes supporters. Mr. Speed circumvented talk of more study of the more environmentally friendly Lake 255 proposal Monday by insisting that the board look at the possibility of moving an underwater dam further down the river rather than doing levees—another attempt to keep the Two Lakes proposal alive.

Any new ideas are welcome—and long overdue, considering that Two Lakes proponents have framed the entire argument as levees v. Two Lakes for more than a decade now, rather than supporting the pursuit of alternatives. And Speed's apparent delaying tactic Monday left many in the room including Lake 255 strategist Barry Royals frustrated at another apparent delay tactic.

The backroom takeover politics must end, and all responsible parties must come to the same table to look for viable alternatives that won't cost more than a billion dollars and destroy our local environment. The sport of blaming the albeit-imperfect Corps for not approving an unfeasible development plan is wasting time and energy; we need flood control that can happen in our lifetimes.

*Note: Levee Board attorney Trudy Allen has retracted her charge that the secretary of state was behind the Blue Book effort. Two Lakes Foundation director Sam Begley told the JFP that he was the source of the confusion. See full story here.