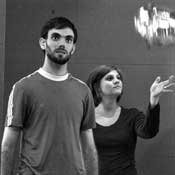 It's quite possible you're one of the many people who go to film festivals on purpose. While I consider myself a movie buff, I will visit my first Crossroads Film Festival this year, and just to make sure I don't wind up watching a two-hour experimental film chronicling the violent love affair of two yard snails, I snuck a peek at a few of the films heading our way this year.

Maybe Pittsburgh (directed by Lyn Elliot, 26 min.) is a live-action short that tells the story of a young wife who tries to save her marriage by taking her husband on a tour of Pittsburgh. As a native of Pittsburgh, I'm not sure where the idea came from that the city is romantically therapeutic, unless coal dust and drunken football fans are what brought the couple together in the first place. But Emily (played by Emily Rossell) believes otherwise. Her husband Joe (Nathan Holt) has just admitted to finding a new female friend: one he enjoys being with more than his wife. Emily decides the only thing that can save them is an industrial getaway.

The couple starts revealing secrets to each other, and honesty does no favors to the relationship. Joe, who comes across more of a caricature than a character at times, exacerbates the situation by constantly challenging the fine line between "artistic dedication to his writing" and "laziness."

I won't give away too much about the ending, but I didn't see it coming. Literally. The film just ... ends. Emily's final lines communicate that she has made a final decision, but the film doesn't make it clear what that decision is. "Maybe Pittsburgh" is worth the watch: Elliot tells the story well, gives you characters to love, and ends before it gets boring.

The Mouse That Soared
by Bret Kenyon

"The Mouse That Soared" (directed by Kyle T. Bell, 5:45 minutes) is a computer-animated short that tells the story of a baby mouse adopted by well-meaning parental birds after the very un-Disney death of its parents. The animators depict the baby mouse in all its baby-mouse ugliness, the characters face grim death constantly, and at one point giant buzz saws get involved. Long story short, I couldn't stop laughing and ended up watching it twice.

We Are All Here
by Bret Kenyon

"We Are All Here," (directed by Yonghwa Choi, 1:48 minute) is a student film that combines cutout animation similar to South Park, with stop-motion animation—a technique that creates animation by stringing together still photographs (seen in such movies as "Fantastic Mr. Fox" and "Wallace and Gromit"). In less than two minutes, the film teaches us that if we don't stop our partying, the world will collapse. Literally. I realize we're working with metaphors here, and yes, I understand the underlying message, mainly because we see this theme all the time. But the visuals and art design are catchy, the music fits perfectly, and is well done.

"Sebastian's Voodoo," (directed by Jaoquin Baldwin, 4:07 minutes) may be a computer-animated short, but it is not for kids. Let me stress this again in case you were skimming—this animation is not for kids. It creeped me out, and I'm the guy that saw "Grindhouse" in theaters twice. "Sebastian's Voodoo" is a tale told from the perspective of voodoo dolls, and each day is a horror. They sit on giant hooks like a scene from a "Texas Chainsaw" movie until a giant grabs them one by one and kills them slowly with giant needles. But as dark as this film is, I couldn't pull myself away. The animators were able to squeeze gut-wrenching emotion from the faceless bags of canvas, and for a movie about voodoo, the story has a very messianic theme. I like darker animations because they can shock you into thinking. But bring your kids, and they'll be shocked into sleeping in your bed until they're 19 years old.

Experimenting with Beauty
by Lacey McLaughlin

"Dealing" is a three-minute experimental film produced and directed by Jackson's Front Porch Dance Company. The film begins with an aerial shot of four dancers seated at a card table on the porch of the Commons and Eudora Welty's birthplace. The dancers take turns dealing cards to the rhythm of local musician Jamie Weem's mandolin.

The cinematography creates an aesthetic transition from the card table to various spots at the commons where the dancers perform modern dance and ballet gracefully while putting on their best poker face. This short film captures the beauty of the Commons and talent of local artists.

Encounter in the Desert
by Lacey McLaughlin

In the short film "The Big Bends," a man diagnosed with a terminal illness decides to spend his remaining days in a camp trailer in the desert while he waits to die. When he encounters a man and woman crossing the border from Mexico, he tries to stop them by force. But when he sees that the woman is pregnant and going into labor, he decides to let them use his car to seek help.

The dying man narrates the film and muses on the new life the immigrants will face in American. "He'll be doing work that's a lot harder than he imagined, and getting paid a lot less than he should," the man remarks. In less than five minutes, the film captures the isolation of the desert, frailty of life and hardships of immigrants.

Every time I watch the "Kings of Crop" music video for the local band Law School, I'm reminded that it's great to be young, especially in Jackson. The song has a refreshingly whimsical feel—it's a perfect song for driving with the windows down on a summer day. The cinematography of the video portrays the essence of the song visually with no discrepancies between the two, which is exactly what a successful music video should do.

The music video looks like a vintage home movie. It captures a group of friends' time around Jackson, in the Waffle House on High Street, Sneaky Beans and the Fondren Corner building, just to name a few. The familiar setting coupled with the carefree actions of the characters, playing air guitar on a spatula in Sneaky Beans, for example, capture the feeling of youthful nostalgia.

"Sunday," (directed by Kris Daw, 12 minutes) is an experimental short film that chronicles a day in the main character's life. The film opens with an animated alternate world, filled with indescribable creatures that monitor and control the main character's actions, and switches between this world and real life. It's evident that the man's daily actions are mundane and mechanical because the actor portrays them lifelessly.

At the end of this day the man lies down on a couch and loses all the life from his eyes. While this happens, a bare tree attacks and defeats the controlling creatures. The film immediately changes gears, from a dull to a hopeful tone, suggesting the importance of breaking away from a monotonous routine.

The animation and the acting are done well, but the connection between the two worlds is subject to many interpretation. In all, this is a short that will make you think

Dealing with Darkness
by Jesse Crow

"Deep Sleep" (directed by Alejandro Alvarex, 15 minutes) is the story of how a brother and sister, Cam and Fiona, deal with the suicide of Cam's wife and Fiona's closest friend, Eleanor. Eleanor remarks that "death is about the living," and this film is an exploration of that theme. The film mainly focuses on Fiona, who slips into a deep depression following Eleanor's death because she felt responsible. Fiona copes with Eleanor's death by sleeping; she is able to speak and be with Eleanor in her dreams.

The acting in "deep sleep" is incredibly powerful. Alvarez makes great use of the juxtaposition between Fiona's dreams and real life—while dreaming, she is outside in a bright field, but really she is in a dark, dreary room looking ill. The film presents the hardships of loss and offers a clear resolution.