Pre-K: An Ounce of Prevention 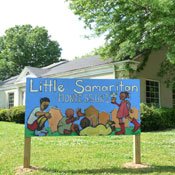 Little Samaritan Montessori is an unusual sight in Jackson's Midtown neighborhood. In an area with high rates of vacancy and a declining population, Little Samaritan represents the future. The child-care center serves 62 children, from 6 weeks to 5 years old, with a Montessori curriculum, an experiential approach to education that emphasizes students' self-direction.

Good Samaritan Midtown, which operates the Montessori program, is also pursuing an initiative to make sure that every child under 5 in Midtown receives some form of quality early childhood care.

"In a neighborhood like this, where we're already dealing with all these issues, it's all about prevention," Executive Director Kristi Hendrix says. "We've got too much to do here to not be comprehensive in our work."

Programs like Little Samaritan Montessori--along with publicly operated programs like Head Start and Jackson's Early Childhood Development Centers--represent Mississippi's best opportunity to beat cyclical poverty and ensure long-term economic development, according to a new report issued by the Southern Education Foundation. Children in quality pre-K are more than twice as likely to go to college than those who don't receive early childhood education and far less likely to repeat a grade or drop out.

The reported economic benefits of quality pre-K are staggering. For every dollar of state investment, a quality early childhood program targeted at poor kids would generate $12.30 in private and public returns, the Southern Education Fund report estimates. Those returns would come in many forms, chiefly a lower incarceration rate and a better-educated and more productive work force.

In fact, while spending on economic subsidies creates more jobs than investing in pre-K in the short term--within 30 years--spending the same amount on pre-K creates almost twice as many jobs in the long term, over 75 years.

As the only southern state currently without a state-funded pre-K program, though, Mississippi risks being left behind by its peers, the report argues.

Little Samaritan is also emblematic of the shortcomings of early childhood education in Mississippi. Despite an admissions preference for Midtown residents, roughly 75 percent of the children at Little Samaritan come from outside Midtown. Many, Hendrix says, are children of professionals who work in downtown Jackson. This influx of children from more privileged backgrounds is a good thing for a neighborhood that suffers as much from vacancies and a population drain as it does from poverty, Hendrix points out.

"Bringing people into this neighborhood is important--bringing positive traffic in," Hendrix says.

Still, outreach to Midtown residents has not been completely successful. A community assessment Good Samaritan conducted revealed that many mothers in the neighborhood simply keep their children at home. Good Samaritan currently employs two home visitors to work with mothers and young children in their homes.

"We're trying to find the parents where they're at," Hendrix says.

For some, tuition at the Montessori program, which runs $120 per week for infants and $110 per week for children over 1, may be prohibitively high.

Others may enroll their children in the city of Jackson's far less expensive pre-school programs, which cost between $76 and $84 per week.

According to a the Southern Education Fund report, more than 25,000 of the state's 85,000 3- and 4-year-olds are enrolled in Head Start, the federally funded pre-school program. The report estimates that at least another 5,900 children participate in private pre-school programs like Little Samaritan. All told, the report says, around 53 percent of the state's 3- and 4-year-olds are in some form of early childhood program.

Rhea Bishop, director of early childhood for the Mississippi Center for Education Innovation, agrees that extending and improving the state's network of existing pre-K programs and groups is a more realistic goal.

Groups like Mississippi Building Blocks have already raised millions of  dollars from corporate donors to support early childhood research and programs, and the Children's Defense Fund has trained child-care providers to coordinate their work with the school system for seven years, she noted.

"Most of our public schools are not designed to handle pre-kindergarten children, particularly those younger than the age of 3," Bishop said.

"(Universal, state-funded) pre-K would the ideal way to go. But in this state, with the budget situation the way it is,  that ain't going to happen. So what we're trying to do is meet communities where they are."

Second, the report urges state lawmakers to establish a bipartisan commission that would plan a statewide pre-K program.

Political efforts to follow the second recommendation have fallen short so far. House Education Committee Chairman Cecil Brown sponsored a bill in the Mississippi Legislature this year that would have created a task force to study universal pre-kindergarten programs.

The House of Representatives passed Brown's bill with significant Republican support, but the measure died in committee in the Senate.

"Mississippi has failed to start a statewide high-quality Pre-K program because its leaders believe that it is a poor state without enough money," Southern Education Fund Steve Suitts writes in the report.

"The truth is that Mississippi will remain a poor state without enough education, jobs, or income for its children and grandchildren if it does not undertake every effort to invest in high-quality Pre-K now."