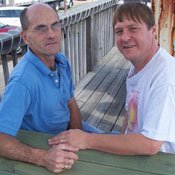 Michael Parker and Larry Emmett have been together for 18 years. Recently, they traveled to Connecticut, one of the only states to recognize same-sex marriages, to get hitched.

Larry Emmett and Michael Parker have been together for 18 years, but they couldn't get married before 2003, when Massachusetts became the first state to legalize same-sex marriage.

The couple met and started dating in southern California, but they had nearly crossed paths in Hawaii when Emmett was stationed there for the Navy and Parker was only 12. One day after Emmett had visited a protected beach, a six-foot great white shark got over the wall shielding the beach. Parker was there, swimming with his family, and Emmett heard about it on the news.

In 1994, the couple moved to Maine, where they started an ice-cream shop. A year later, they planned to move to New Orleans, but an ailing car forced a layover in Jackson. With four cats and a 13-inch color TV, the pair moved into the Dollar Save Inn. Emmett got jobs in local restaurants, while Parker stayed home to hide the cats from the motel's management. Eventually, when they moved to Belhaven, Parker took classes at Millsaps College.

Today, Emmett and Parker are co-owners of the Pizza Shack, which they opened together in March 2006. On Dec. 7, 2009, they married in front of a justice of the peace in Bridgeport, Conn.

At what point did you two decide you wanted to get married?
Parker: Well, we'd wanted to get married for years, but it's not an option. We had a holy union here in Mississippi in 1998 at the Metropolitan Community Church. People do it as a symbol of being married, but it's not a marriage. So we did that; we had a lot of friends, had the ceremony and so forth. So, at what point did we decide to go do this in Connecticut? Honestly, a few days before we did it.

Emmett: My mother was visiting; she lives in South Carolina. We were going to take her home on a Sunday, and he went to my mom on Thursday and asked her for my hand in marriage. I said yes.

Tell me what happened when you got to Connecticut.
Emmett: We went to the courthouse and waited for the marriage license for about an hour. Then we drove to the justice of the peace. Three minutes later, we were married.

Parker: At the courthouse they give you a paper that lists all the justices of the peace with little stars next to the ones that will marry same-sex couples. So obviously some of them refuse to marry same-sex couples. We called one guy and told him when we'd be up there. We went to his door, and he married us right there in his hallway. Then we said goodbye, hit the road and started going home.

Did you celebrate at all that day?
Parker: No, we didn't. It was crappy weather, and we didn't know anything about Connecticut. So we spent the next four or five hours driving back down to Maryland. The next day we drove to Atlanta, and we celebrated that day. We went to the aquarium. I know it's not very exciting, but it was the idea of getting married that was important, not the celebration aspect of it.

Why did you want that legal document?
Emmett: First of all, we can save on insurance. I'm 53 years old, and I'm still paying the same taxes as an 18-year-old would.

Parker: As a single person would. It was insurance purposes—

Emmett: —but not only that. I love him.

And what is it about the legal side that matters so much?
Parker: Well, the legal side is insurance; it's death protection. If you're gay, your family can swoop in and take everything.

Were there any legal protections you could get in Mississippi before?
Parker: I know of people that have adopted their mate, so they could have the dependent. This is how crazy it gets. You've got to have a living will if you're a gay couple.

Emmett: Even with a living will sometimes it's not enough.

Parker: People have gone to various extremes. As far as the law's concerned, here in Mississippi, he and I are just friends. If something happens to him—for instance, suppose he's on a respirator, suppose he's about to die. I don't have the right to make the decision what to do with him. Not in this state. You'd have to call in his family, who's all in South Carolina, to make that decision.

Now that you're married, where are the points of conflict?
Parker: Now it's not recognized here, but some lawyer hopefully will want to make a name for himself. We will be happy to challenge laws if a lawyer is willing to show us how to do it. We know we're going to lose, but hopefully it will be a starting point so more people do it.

Emmett: This has just started becoming legal in the last seven years. Finally we're able, financially—well actually we aren't, but we did it anyway—to take advantage of it.

Parker: There are a lot of people that simply can't afford to go to Connecticut and a lot of gay couples that want that little piece of paper. We would like to see them be able to (get married) at home. And if people aren't taking advantage of it in Connecticut and other states that allow it, then there's no model.

I'm sure all your straight friends have gotten divorced now that they know you're married, because same-sex marriage weakens "traditional marriage."
Parker: Of course. (People) say that this is going to influence the future of their children, that it's going to promote gayness. I don't think anybody really wants to be gay. "Wow, it's cool to be gay this week." It's an inherent thing; you're born that way.

Wait, so you're saying there's no homosexual agenda?
Parker: Well, there's a little one. We will rule the world. Here's the thing, the younger generation has no problems (with homosexuality). Particularly in this state, there was a lot of racial prejudice, and as people get older and die, there's a lot less of it. Anybody you know that's a racist is probably 50 or older. And I think eventually change will occur here. The gay prejudice, it's generally with older folks. One day, (same-sex marriage) will be legal here. There's no doubt. But you have to take those steps to make it happen. And by getting married, we have started to do our part.