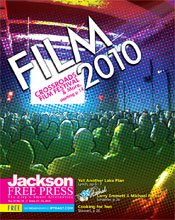 Several months ago, a group of local film enthusiasts started the arduous process of screening films for the Crossroads Film Festival. After spending entire weekends camped in front of a television watching hundreds of films—some inspiring, and some not so inspiring—they democratically selected this year's festival line up. In this issue of the JFP, we've provided reviews and a smattering of other features for your film-going pleasure.

Crossroads brings some of the most thought-provoking and inspiring films and filmmakers from all over the world to Jackson. All-access passes for the festival, which runs Friday through Sunday at Malco Grandview in Madison, are $60 for Crossroads Film Society Members and $80 for non-members. Individual movie tickets are $6 for members and $8 for non-members. For the festival times and schedule, visit http://www.crossroadsfilmfest.com.

Building a Better World
Shorts on Shorts
Fighting Injustice
The Cost of Witnessing
Building on Faith
Questioning Human Nature
The Greatest Connection
A Good Day to Die
In a Pig's Ear
The Kid In the Picture
A Different Kind of Road Trip
Radio: Mississippi Style
Deep South Tinseltown
A Jew For Palestine
A Movie Theater In Jackson?