A Movie Theater in Jackson? 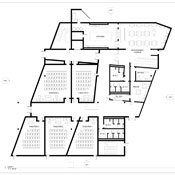 Neil Polen, a fifth-year architecture student at Mississippi State University, wants to change that. Polen, 24, is working on plans for his thesis that entail a unique movie theater and restaurant on the ground floor of a three-story apartment building on the corner of Old Canton Road and Duling Street in Fondren. While still just an idea, Polen says that having several small intimate theaters in addition to apartments is one way to create more density and add to the artistic Fondren atmosphere.

"This gives us the chance to create something different than the suburbs," Polen says. "Let's skip being like everyone else; let's be different and unique so that people from the suburbs want to come here."

Polen's model is inspired by Living Room Theaters in downtown Portland, Ore., a concept with small theaters with couches, lounge chairs and tables that are coupled with a restaurant and bar.

Aspects of the Design
¸ 13,000-square feet per floor.
¸ Residential apartments on the second and third floor.
¸ Five 1000-square-foot theaters that seat 45 people each.
¸ Ground-level restaurant where patrons can dine, or they can be served inside the theaters.
¸ Bar and lounge area.
¸ Small theaters meant to show a mix of mainstream and independent films.
¸ Comfortable lounge chairs and tables for dining in the theater.
¸ Private entrance for residents.

Neil's a sharp dude, and this is a great idea. Melia and I would go to a similar theater in Oakland when we were there. When I was at the Young Professionals Alliance meeting a couple weeks ago, Julie Skipper brought up the idea that in other cities, the young professionals would get together around a specific idea and say "THIS is what we want." I think with the head start of having a plan, a design, the need statement worked out, this could certainly be a real catalyst to get something like this going! (Plus, *I'd* go to the theater pretty often.)

YES! THIS is what we as young Jackson creatives & professionals would LOVE to see. David, Ben, Mike, Leland...are you reading!?!

Darren, that is exactly what needs to happen. Young professionals in Jackson really need to claim their/your clout. Of course, BOOM Jackson is going to be a forum to help get big ideas out there so -- promotion alert -- y'all help us come up with the ideas to present to the city, not to mention celebrate all the great stuff that young-pros and creatives are doing in the city. Exciting times in Jacktown. I can honestly say I would live nowhere else.

Nice idea. But doesn't Jackson need a theater that caters to kids and teenagers more than it needs on that caters to adults like this one would with a restaurant and bar?

Not really, Bubba. And plenty of theaters can do both. Much of Jackson's eco-devo is being driven and supported by young professionals and creatives. It would be smart business to build an urban-type theater as other big cities have.

And there are young developers floating around who might be able to get this done, even if some of the go-to folks are busy with other projects. This is GREAT project for young-pros to get behind.

What happened to the Capital Green Project south of Hal & Mal's with the movie theatre plans?

The most curious thing about this idea to me is how tiny (by theater standards) the screening rooms are. But I was able to locate a floor plan online of the existing Living Room in Portland and indeed this appears consistent with what they are doing there: http://www.portlandmercury.com/imager/living_room_theaters/b/original/94170/c2f1/seating_floorplan.gif

Yeah, the old SilverStar $1 movie theatre in Gulfport and Movie Pitchers in New Orleans had tables and chairs & couches, served "pitchers" of beer & bar food. Movie Pitchers sat about 45 per room and had about 5-6 screens & had ONLY indie films. It was great. Both went under. They couldnt make enough money to pay for the film rental fees. I'm not sure if a distributor with a first run print would send their print to a 40 seat screen since they can make more sending it somewhere else. I'm sure there are a few exceptions. And you certinly dont want to show films once people can Netflix them.

If I had money to make it happen, I would renovate the old Iron Horse into *this*. And try to host things like Crossroads Film Festival, have an "Oscars Week" where you show some of the more obscure films that Jacksonians (and most cities) don't have access to and other things like that. I would suggest that anybody thinking about doing this visit any Alamo Drafthouse in Austin, TX. That place does it right. You can watch current movies and/or indie films and have dinner and a drink or two while watching. I have heard of a similar theater in Portland. I think that doing things like they are done in Portland and Austin is a very good step. Those places are incredible.

Yeah, the original Alamos in Austin are the Holy Grail of uber-cool theaters (with few rivals anywhere beyond maybe the New Bev in LA). Looks like the all-digital arthouse mini-theater idea is also coming to downtown Austin soon though: http://www.austin360.com/movies/new-art-house-theater-to-open-downtown-545116.html Whether it's brilliant new business model or just a fleeting fad for the post-Netflix generation only time will tell.

Thanks to everyone for the kind comments. I've received way more interest in this proposal than I imagined. It seems there definitely is a desire to make this happen. If you'd like a quick view of what this building "could" look like I recently posted an image of where the project stands at this point: http://twitpic.com/1h699i

Bring it on somebody! We need this and heck add a bowling alley too. The TooLiveKrewe Bowling Team!