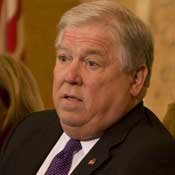 "My decision to challenge this legislation was not taken lightly or made without thorough consideration," Barbour wrote to Hood in a letter today. "The legislation would prove disastrous for Mississippi's economy, its budget, and its taxpayers who would see their premiums and taxes increased as a result of it. Legal scholars have analyzed the bill and discussed its potential constitutional flaws for at least a year. By now, some twenty states have concluded the law violates the Constitution and have taken steps to challenge it. You are certainly correct that challenging this act will be no easy task, especially as a matter of procedure. Success is uncertain, but I do not intend to ignore my duty simply because of procedural difficulty."

In a letter sent to Barbour Friday, Hood advised the governor that because the issues raised in the multi-state suit can only be decided by the U.S. Supreme Court, "there is no hurry to join the suit," and that it would be cheaper for Mississippi to wait. "In law and in life, the old maxim 'haste makes waste' still applies."

Hood also told the Barbour that if he still feels "compelled to take action," he should do so on behalf of the governor's office and "in your own name."

"Our office will decide what actions to take on behalf of the interests of the people of the State of Mississippi after conducting a due diligence review of the subsequent filings," Hood wrote. "Our office takes no position on the propriety of the health insurance reform act. Our decisions are made on the dry law, not economic or political expediency."

Attorney Michael B. Wallace of Wise, Carter, Child & Caraway law firm in Jackson will represent the governor in the lawsuit at no cost to the state. In 2006, President George W. Bush nominated Wallace for a seat as fifth-circuit federal judge. The People for the American Way, a non-profit government watchdog group, released a report in 2005, criticizing Wallace for "demonstrating either an inability or unwillingness to prevent his beliefs from interfering with his professional obligations."

And, hey, according to that same story 67 percent rate the public option as "important" even as they want HCR repealed (same link): http://www.insideindianabusiness.com/newsitem.asp?ID=41123 This is a telling line: “While at first glance these findings may seem to tell a clear story, results from other portions of the survey demonstrate that the repeal question may be less about actual policy goals than previously thought,” he added. For instance... When asked how imperative they thought it was for Congress to work on “establishment of a public option that would give individuals a choice between government-provided health insurance or private health insurance” in the upcoming legislative session, 67 percent of Americans rated this as important. This finding is even more striking given the fact that 59 percent of all those in favor of repeal rated the public option as important. Moreover, so did 67 percent of all Republicans and 59 percent of all Independents. Interesting...maybe, as has been said previously, the public option is considerably more popular among the entire US population than either members of Congress or the lobbyists would like us to believe?

If memory serves me correctly similar outrage, anger, and defiance followed the 13th, 14th, and 15th Amendments; the Civil Rights Act of 1964; the Voting Right Act of 1965; Brown v. Board of Education, the New Deal, et al. This apparently is the southern way of doing things up to now and probably forever. The Healthcare bill is just new fodder to attach. Hopefully, it will be met with the success of the other challenegs. I realize the South got some help from other places now.

Seriously? The About Us page for the Indiana University's Center for Health Policy and Professionalism Research (CHPPR) group reads like a bio for a lobbyist firm. Forgive me if I doubt the validity of the findings of this group as reported on a "pro-business" website. Figures often beguile me, particularly when I have the arranging of them myself." - Mark Twain.

We have people reacting before congress finish with the Health Care bill. It is amazing to me the amount of money and propaganda that has been used to discredit this bill. I really thought that I would not have to relive the past. When the Civil Rights Bill was passed I saw the same type mentality as I see with Haley Barbour now. He right on board to block change especially if it affects minorities, senior citizens, or low income people in this country. I watch Haley Barbour raise the devil about everything that Obama is trying to get done and it's a shame. I would like to know what is Haley Barbours plan for health care for Americans? Barbour always complaints what Obama is trying to accomplish for all Americans and not for the few who has used poor people throughout history to make them rich. Barbour should also be asked if this Health Care Bill is to expensive for America then why did he support the Billions of Dollars on the War in Iraq? All of those young American Soldiers coming from the majority low income and middle income families being killed all because the Republican President lied to the American People about Weapons of Mass Destruction in Iraq. Barbour had nothing but support for Bush actions while thousands of our children die and are continuing to die because of a lie. Haley Barbour is nothing but mouth and he needs to learn to control his contempt for minorities. I understand and believe that God created all mankind and we know well that Satan has his followers such as Haley Barbour.

Cripes, and I suffered through pages of scolding and debate just because I used the terms "collectivist" and "central-planner" (which, by the way, were not applied to any actual individuals in my original post, despite repeated claims that I had "labeled" people). Is it just completely unfathomable that some people might actually believe the HCR bill is unconstitutional? I suppose it's just easier to believe that anyone who doesn't support a system of handouts has "contempt for minorities".

(a.) Tony's is a new post and I haven't gotten around to him yet for chiding him for suggesting Barbour is a devil-worshipper. Tony -- there's no evidence of devil-worship on the part of the Guv; I'm sure he's an upstanding whisky-tarian. Contempt for minorities? There's more support for that, from the "piano bench" all the way to the most recent comments about slavery and Virginia's confederate history month declaration. Barbour -- somehow -- finds himself embroiled in these circumstance wherein he find it handy to upset folks of African-American descent. There's even an argument that he's made a career of it, from his rise to the GOP chairmanship through his connection to (perhaps architecture of) the Reagan southern strategy in partnership with Lee Atwater; later, immediately after his GOP chairmanship, he parlayed that into a lucrative biz as the "most powerful" lobbyist of the GWH Bush era. (b.) Mark -- let's not start another thread about your Cato Institute characterizations of supporters of HCR. If you want to try again on those topics, put it back on that thread -- I'd love to see you answer some of the questions put to you on that thread.

(a) It seems most of that "evidence" relates to African-Americans, so if Chef Tony (or you) wants to cast accusations, let's be precise about it. Asian-Americans are a minority, but nobody accuses the GOP of hating them or of pushing policy targeted to hurt them. 9b) I don't have the time to review those threads at this point. After wasting the better part of a week defending myself for daring to use the terms "collectivist" and "central-planner" and being scolded for "labeling my opponents" (despite never applying those terms to any individual actually involved in the debate), I grew tired of the double standard and see no point in continuing.