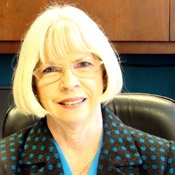 The American Institute of Certified Planners granted fellowship to Jackson director of planning and development, Corinne Fox, last week for her achievements in mentoring, research and community service.

As Jackson's director of planning and development, Corinne Fox has her eyes focused on the future. As a result of her forward thinking, The American Institute of Certified Planners granted fellowship to Fox last week for her achievements in mentoring, research and community service. Fox is one of 425 city planners who the organization has given fellowship to since 1999.

1969, Fox was the first woman to earn a master's degree in Urban and Regional planning from the University of Mississippi. She went on to become the first female to establish a planning firm in Mississippi called Continental Consultants. During her 45-year career she has written more than 30 comprehensive plans for municipalities.

Last July, Fox began working as the city's interim director of planning and development and Mayor Harvey Johnson Jr. appointed her to serve as director last November. In that role, Fox has played a key role in forming a development strategy for the Highway 80 corridor. She also works with consultants, code services and community improvement projects. Fox has also played a roll in securing storefront improvement grants and other city grants for economic development projects.

In 1996, as a senior planner for the city, land Fox took the lead in developing a citizen-driven comprehensive plan. She also wrote a downtown strategic plan for the city that city spokesman Chris Mims says has brought $2 billion in private and public investments to Jackson.

"For Corinne to be chosen to be a part of this distinct group of individuals out of the some 15,000 practicing planners in North America speaks volumes about her commitment and character," said Johnson in a press statement.

Corrine is a class act and a real asset for this city. David Watkins