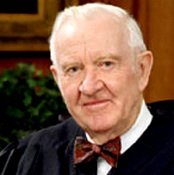 Supreme Court Justice John Paul Stevens has said he will retire after the current court session, which ends this summer, reports The Washington Post. Stevens is 11 days shy of his 90th birthday.

The opening is the second opportunity for President Barack Obama to name a justice to the nation's highest court, the story states, naming three possible successors to Stevens.

The timing of his announcement leaves ample time for the White House to settle on a successor and Senate Democrats, who control 59 votes, to conduct confirmation hearings and a vote. Republicans have not ruled out an attempt to delay confirmation.

I can't thank the judge enough for retiring at a point to give Obama a chance to fix the SCOTUS, too. That Obama is a bad mother shet your mouth.