The Siren Song of Food 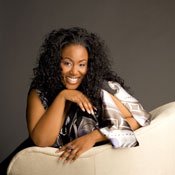 The world first met the vivacious Mandisa, with her powerful voice and mega-watt smile, during the fifth season of "American Idol" in 2006. Unfortunately, she also became known for Simon Cowell's negative comment at her audition: "Are we going to have a bigger stage this year?"

Mandisa continued to offer stellar performances, and she eventually told Cowell: "You hurt me, and I cried, but I want you to know that I've forgiven you." Cowell was instantly humbled and apologized. She came in ninth that season.

Since "Idol," Mandisa has released three records—"True Beauty," "It's Christmas" and "Freedom"—and is at work on a new record. Now 33, Mandisa has received two Grammy nominations, attending the ceremony for the first time in 2009. "I was like, I'm really here right now. It blew my mind that I was a part of such an amazing night," she says in a telephone interview with the JFP.

She also wrote a book, "Idoleyes: My New Perspective on Faith, Fat & Fame" (Tyndale House, $14.99, 2008), about her "Idol" experience, her childhood and her struggles with weight. She has lost about 85 pounds.

"I (had) this goal of losing 100 pounds," she says, "and I've been driving myself crazy with that. I think I've been focusing so much on the scale and on the number. Now I'm getting back to just doing what's right, doing what's healthy, and not killing myself to achieve this number."

For Mandisa, born Mandisa Lynn Hundley it's more than just weight loss. "It's a food addiction for me," she says.

"I think if you look at it like you would alcohol, there is something physiological in an alcoholic's mind. … I don't want to say they can't stop, but it's a force that is very, very strong," she adds. "It's not just a matter for me of ‘Oh I just won't eat that.' It really is like warfare when I am tempted to eat something I know is not the best for me. "

Kostas Matheos, clinical director of A Bridge to Recovery in Ridgeland, has worked with a number of food addicts throughout her career. "Food addiction is a compulsive behavior like any other addiction, whether it's sex, gambling, drugs or alcohol, and usually there are consequences," she says.

Despite the health risks involved, food addiction is not something that can be just willed away. "It's constantly thinking of food, just like a crack addict is thinking about how they're going to score their next fix," Matheos says. "It's the same process that goes on. … Most food addicts that I've worked with are addicted to sugar, there's that craving. It's kind of like an alcoholic coming off of alcohol … the same chemicals go on in the brain."

There is hope, however, for the food addict. Research suggests that approximately 80 percent of compulsive overeaters recover with the proper counseling or therapy.

"You have got to deal with the issues that had you turn to food to begin with," Mandisa says of her recovery. "In my case, it had to do with childhood abuse and just finding that food was a comfort for me. You can't ignore that … you have to deal with the root issues before you'll ever find long lasting success in that area … That's been the most difficult part of it, but the most important part of it for me."

Matheos, who is also trained to work with trauma patients, echoes that sentiment. "There's a lot of trauma, sexual abuse, abandonment issues, lots of grief and loss, and food is a great way to avoid," she says.

Mandisa has learned that it's not just about what you eat, but having a healthy mind, body and spirit. But it's still a challenge. "The thing that makes it harder is that I have to face food every single day. Food is what I always turn to for comfort and to fill this void. I think that's a true sign of an addiction, if you turn to it in order to cover up something or medicate something. … It really is more powerful, and it takes a lot of strength and help from the Lord to resist doing things that I know are not the best for me," she says.

Matheos agrees: "It's got to be a spiritual recovery process or else it's got a huge missing link."

Through her weight-loss journey, some universal tips have emerged for Mandisa. "One is to not diet, but to find healthy eating focusing on whole grains, fruits, vegetables and real food as opposed to processed food. Physically … If you're going to maintain it for a long time, the rest of your life, finding something (exercise) you enjoy is an important thing." Mandisa exercises regularly, and does Zumba because it allows her to get fit while doing her favorite thing, dancing.

She sings from the heart, and her songs coincide with her personal experiences. Asked about her favorite song on "Freedom," she named "My Deliverer."

"t spoke to my testimony … (when) I was in the thrust of being set free from the food addiction," she says. "And to be able to proclaim that my Deliverer is setting me free from all that has held me captive is just amazing. It's a song that makes me want to get up and exercise."

Mandisa will perform Saturday, April 17, at the Extraordinary Women Conference that starts April 16 at First Baptist Church in downtown Jackson. For tickets and information, visit http://www.ewomen.net or call 1-800-526-8673. Tickets are $69-$89.

Are you a food addict?

Food addiction can manifest in several different ways:
• Excessive food or compulsive overeating.
• Binge eating or lack of control with food.
• Insufficient, restricting or an avoidance of food.
• Constantly thinking about food and avoiding it at the same time.
• Over exercising.

Signs and habits of the food addict
• Weight gain; however, food addicts don't appear to eat a lot in public. (Weight gain can also be associated with a thyroid problem or other physical ailment; therefore, consult your physician before beginning a weight loss regimen.)
• Hiding or sneaking food.
• Eating full meals, not just snacks, multiple times a day.
• Obsessing over body image.

Get to the root of the problem
After losing weight, some bariatric (gastric bypass) patients begin to abuse alcohol and drugs, swapping one addiction or compulsive behavior for another.

Ask questions
She encourages clinicians to ask lots of questions. Is there a history of gambling, over-shopping or other compulsive behavior? Many people are cross-addicted; they may be "binging and purging" with food, sex, or with alcohol and drugs.

Twelve steps
Matheos encourages food addicts to attend 12-step meetings like Overeaters Anonymous, and she helps her clients learn how to find boundaries: "We help people learn that they can go to Baskin-Robbins and get a scoop of ice cream, but they don't need to have a quart of ice cream sitting in (the) freezer or go every day."

Healthy eating, not diet
Don't diet. Rather, it's about getting on a healthy eating plan tailored to your specific needs, and learning how to have a healthy relationship with food.

Exercise
Matheos and her team have introduced yoga as the exercise component of their program. But each person has to find something they enjoy. Exercising with a buddy can help, too. "The incredible thing with our clients has been that they partnered up. … They're out there with a friend and building more of a community," she says.