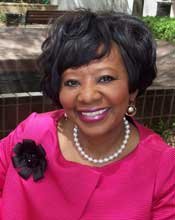 As the second youngest of 13 brothers and sisters, Dr. Juanita Sims-Doty grew up in Canton "holding and picking cotton" until her sophomore year of college. Now the southeastern regional director of the Alpha Kappa Alpha Sorority Inc., Sims-Doty spends her time encouraging young women to serve others and embrace  educational opportunities.

Sims-Doty was determined not to leave school until she earned enough degrees to make a good living. She received her bachelors and master's degree in sociology from the University of Southern Mississippi and a doctorate in early childhood education from Jackson State University in 1985.

"God puts people and organizations in your life so that you can use your skills in a better way, so Alpha Kappa Alpha is that vehicle for me," she says.

As AKA's southeastern regional director, Sims-Doty, 57, lives in Jackson but spends most of her time traveling throughout the country encouraging sorority members to get involved in service. She oversees 53 graduate and 48 undergraduate chapters in Alabama, Tennessee and Mississippi.

She was responsible for organizing the sorority's 78th southeastern regional conference last month, which brought 2,300 AKA members to Jackson. Doty-Sims estimates it brought a $1 million economic boost to the city.

Sims-Doty has played an important role in securing $400,000 for universities in the southeastern regions over the last several years. She also set up the Juanita Sims-Doty Scholarship Fund at Jackson State University and she has helped raised $2 million dollars for the sorority's education, health and literacy program. The money from the program is allocated to various communities. In Jackson, for example, Walton Elementary School received funding from the sorority for an after-school reading program for children.

When Sims-Doty does motivational speeches and speaks at various conferences she focuses on the principles she lives by: "Seek divine purpose, have self-esteem, excel, have a heart to serve others, educate yourself and remain humble."

Sims-Doty attributes her commitment to serve others in her community to her Christian faith. "Serving is one thing I feel that everyone should do. I feel in order to be a great leader, you have to serve first. How do you know how to lead those who serve, if you haven't done it?" she asks.