Spoken Word in the City 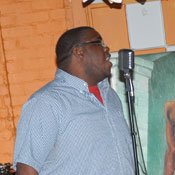 The chatter in the colorful, dimly lit back room at Cultural Expressions in West Jackson hushes to a whisper as Mariama Guice calmly approaches the vintage microphone. The audience leans forward, captivated by Guice's unapologetic, in-your-face delivery. Her voice resonates off the brick walls adorned with paintings from local artists. She recites her poem from memory with a determined tone, wrought with emotion. Purposefully stepping away from the mic, Guice spits her verse from memory, using only the echo of the room to pierce the silence.

"My feelings insufficient, but I'm not a bank account /
Nor do you take them into account, so I guess I'll always be broke, /
You son of a joke, I wish you would have choked /
The second your name exited your mouth from your throat /
Because you are just so inconsiderate."

Guice says the best poetry comes from the heart of the poet, and the truest verse is written for the writer, not for an audience.

Guice is one of many local poets, singers and rappers who "spit," or perform spoken word and slam poetry each week at the Millsaps Avenue art studio. She says Cultural Expressions' live open-mic and poetry slam, dubbed "Spoken Word in the City," provides a place where poets can perform their craft in front of a live audience, while aiming to defeat cultural stereotypes.

"The ‘Spoken Word in the City' thing is making it a really bigger movement than what it's been," Guice says. "Because when people come out to that, they're like, ‘Wow, we've got some talented people in Mississippi, not just some country bumpkins.'"

Cultural Expressions has experienced a plethora of setbacks and relocations. After moving from its original location on Capitol Street in 2004, Seven*Studios made Millsaps Avenue its home; the venue changed its name in late 2009. Now, the art studio features local photography, paintings and sculptures throughout the building. A lounge in the back provides plenty of space for local poets, singers, rappers and dancers to perform for audiences.

Singer Cornelius Wilcox, known under his stage name "Jagwar the Human Jukebox," says the venue's seen a rise and a downfall, and is now experiencing what he calls a rebirth.

The entire neighborhood is filled with undiscovered artistic talent, he says, that relies on Cultural Expressions for a performance space and gallery. Jagwar points out an eclectic-looking black table in the lounge, which changes colors like a mood ring upon human contact.

Jagwar says Jackson has plenty of creative people, but not nearly enough places that welcome and foster creativity: "We're like a bunch of crabs in a bucket. Steppin' on each others' backs, trying to get out, trying to be heard. And we ain't goin' nowhere."

Jagwar is worried about what would happen to Jackson's penchant for creativity without performance spaces getting local support.

For Jackson poet and singer Matthew Simmons, Cultural Expressions has helped him grow as an artist, by offering him a place to improve his craft through performance. He compares the local arts community to a tight-knit family.

"I did poetry; I wrote songs in high school, but I never had a venue to express myself," Simmons says. "When I got here, this became my home. Artists who came before me, they mentored me. Like, ‘If you need my help, I'm here. This is what I think you could improve on.'"

Simmons says while cities like Atlanta, Austin and Philadelphia are known for encouraging creativity, Jackson could join that list if city residents come together to support local artists.

"You see an influx of new talent, but a lot of the talent that you see is a lot of talent that's been here for a while," he says. "It hasn't been discovered because it wasn't on the forefront. But you can hear it here every Sunday, and it's drawing people back."

For Jagwar, local artistic venues like Cultural Expressions are the best way to encourage diversity and understanding. "Art, music, it transcends races, colors, nationalities, creed, orientation," Jagwar says. "It's your character, it's what you bring out there. Because your true self comes out on that mic."

So, is Sunday open mic night? What time?