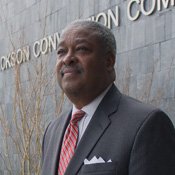 Jackson Mayor Harvey Johnson Jr. said the council's adopted budget means that his administration will have to cut more than $600,000.

Gilmore-Love, who graduated from Mississippi State University with bachelor's degree in civil engineering, is an environmental engineer for Terracon Consultants Inc. in Jackson. She is also a member of the public education advocate group Parents for Public Schools.

"She graduated from our Parents' Leadership Institute, so she knows the issues," Parent's for Public Schools Executive Director Susan Womack said. "I'm confident she will be an asset to the board."

Gilmore-Love is a Ward 1 resident, and will be potentially replacing Jonathan Larkin, another Ward 1 resident whose term expires this year.
A Vicksburg native, Burton, 60, attended McIntyre Elementary School and a racially segregated Temple High School. Burton has a master's degree from Jackson State University in media arts and technology, and a doctorate in public administration from Mississippi State University. Burton, if approved by a majority of council members, will replace board President Sollie Norwood, whose term expired in March.

Burton's appointment may irritate Ward 2 Councilman Chokwe Lumumba, who has advocated for Norwood to be reconfirmed for his seat on the board. Last month he told reporters that Norwood "is doing what he is supposed to do."

Lumumba argued that Johnson replace Larkin, however, and said that Jackson Public Schools' largely black student-body are under-represented by the board's two white members, George Schimmel and Larkin. Ward 1 Councilman Jeff Weill, meanwhile, said today that he is fine with Larkin's work with the board, and is in no hurry to lose him. Johnson told the council last November that he did not want to replace Larkin because of the number of new inexperienced members serving on the board. Larkin, Ivory Phillips and Norwood are the only members who have served more than 12 months.

House Bill 1153, signed by Gov. Haley Barbour last week, expands the Jackson Public School Board to seven members, each residing in one of the city's seven wards. The bill does not impact Johnson's decision to move forward with the replacements.

"At this point, Mayor Johnson has put these two candidates up for appointment, and we're awaiting council confirmation," Mims said. "When the legislation becomes law and goes into effect we'll look at making appointments to the wards not represented at that time."

Correct me if I'm wrong, but isn't the JPS school board mostly black? If it is, how does having a black majority board constitute an under-representation of a mostly-black school district? Is Lumumba's argument that there should only be one or no white members?