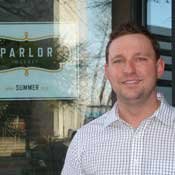 Craig Noone is nervous these days. The Jackson native is opening his first restaurant, Parlor Market, in June, and he spends his days overseeing renovations at the 115 W. Capitol St. location.

Noone, 30, trained at the Texas Culinary Academy in Austin and in Italy. He's also worked with award-winning chefs like John Besh in New Orleans and Dean Fearing in Dallas. One year ago, he left a dream job at Fearing's restaurant in the Dallas Ritz Carlton to return to Jackson.

"It was a total leap of faith," Noone said. "I just knew that downtown—it was coming."

Noone wanted to wait several years before opening a restaurant in downtown Jackson, but news of the King Edward Hotel's reopening spurred him to action. He drove back to Jackson with $1,000 and a business plan. Within two weeks, he had found a silent investor—someone he'd never met before—willing to back his ambitious vision.

The interior will feature an open kitchen, showing off the cooks' work, and a raw bar. Noone expects construction on the interior to wrap up in May. He is planning a two-week soft opening, followed by a large, public grand opening.

Parlor Market will offer a Southwestern-themed menu, offering items like avocado fries, along with more familiar dishes like tamales and enchiladas.

The cuisine may not be entirely local, but Noone's passion for the local is evident in every other detail. The exposed ceiling beams are Louisiana cypress. Noone tried to acquire every piece of kitchen equipment from in-state businesses. He almost succeeded: Other than the range, every part of the kitchen—from the walk-in refrigerator to the shelving—will come from a Mississippi-based company.

Perhaps most ambitiously, Noone plans to acquire 80 percent of the food for Parlor Market from in-state producers within 5 years of the restaurant's opening. He is reaching out to area farmers and hopes to host limited-quantity Saturday brunches with local ingredients.

The restaurant also pays homage to prior occupants of the Capitol Street space. The marble-topped oyster and ceviche bar will hearken back to two previous tenants, Dixie Marble and Al's Half Shell. Noone is planning to install leather banquettes along the wall, a nod to Continental Leather, which also once did business in the building.

Even the name Parlor Market is a reference to one of the building's past incarnations, an early 20th-century grocery store.

"I just think that all Southerners like stories," Noone said. "We're all storytellers. I want the restaurant to mean more than coming in here, eating a quick meal and leaving. I want to bring back the old history of downtown with new food."

OMGosh, how wonderful!!!!!!!!! I will be in there eatin' that Southwest cuisine. Two years in Dallas left me with a craving for it and I can't think of a better place for it than 115 West Capitol!!!!!!!!!

Wow! I was just in the YPA meeting yesterday downtown where someone was saying downtown needed an upscale restaurant that served texmex/southwest flavor! Wish granted! Congrats...and all the best to you, Craig!

mmm good... he'll see me on payday! Appreciate the courage to take that leap of faith & invest in downtown Jackson!