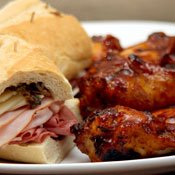 I wasn't raised by athletic enthusiasts, and I have never engaged in the great debate that has divided Mississippi families for decades֖State vs. Ole Miss. Yet, every year we make a pilgrimage or two to Oxford. My husband, a huge Ole Miss fan, enjoys watching the game from the bleachers of Vaught-Hemingway stadium, and I appease him because heaven only knows how many sappy chick flicks this man has had to endure over the years for my sake.

Attending a football game is complete torture for me. But while I can't appreciate the ins and outs that go into making a good game, I do enjoy tailgating. I enjoy the sights, sounds, good food and camaraderie and partaking in an adult beverage (or two).

I also have learned what constitutes a good tailgating dish and what does not. I will admit my first contribution to the spread֖some dry, dense orange marmalade and dark chocolate brownies that had not been kitchen tested prior to the game֖went largely untouched. Good tailgating food can't be overly fussy, must be eaten with the fingers, and taste just as good at the end of the day as it did in the beginning.

The minute I opened my first jar of chipotle peppers in adobo sauce, I smelled barbecue and knew I had to find a reason to slather this ingredient all over chicken wings. You can adjust the amount of chipotle that goes into the sauce to your preference. For wimps like me, I prefer less hot and spicy, and more sweetness. People like my husband, who live by "the hotter, the better" creedo, can increase the chipotle for more punch. Serve the wings dry with the sauce on the side, or slather them up for gooey goodness. Just be sure to keep extra napkins on hand.

Mini mufalettas actually taste better the longer they have a chance to sit. Making them the night before gives the olive salad time to soak into the bread and infuse the meat and cheese with its salty flavor. I admit that, I have occasionally used a store-bought jar of olive tapenade. I like to use mini ciabatta rolls for a small get together. For a crowd however, opt for the more economical baguette.

Cut baguette in half lengthwise. Spread olive salad over the inside of both lengths of bread. On the bottom half, arrange salami, followed by a layer of provolone, ham, and finally mozzarella. Arrange top half of baguette over sandwich. Cut sandwich into 3-inch sections. Secure each section with a toothpick. Arrange sandwiches on a platter, cover and refrigerate for at least 2 hours, preferably overnight.