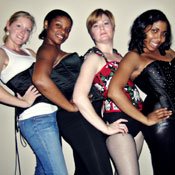 The song "Boogie Woogie Bugle Boy" by The Andrews Sisters plays from a nearby iPod in the large building that is the National Guard Armory in Clinton.

The three members of MRV are fleshing out a burlesque routine for the "Roller Derby Revue" fundraiser they will host Nov. 15 with the Pretty Things Peepshow, a New York City-based traveling burlesque and sideshow troupe. They work on synchronizing dance moves reminiscent of the '40s, with flirty yet refined leg twisting and arm shuffling. Thomas, 27, Vixens president and co-founder, says none of them has dance training. But, in the traditional grass-roots nature of roller derby, the team is taking part in PTP's show, which includes not just burlesque, but sword swallowing, glass eating and other sideshow specialties. Thomas and Sledge-Prince will lip sync "Mr. Sandman," first performed by the Chordettes in 1954, and most or all of the team will participate in a third act: the Bunny Hop.

Roller Derby is a (predominantly) women's racing sport, originating in the 1920s as flat-track competitive roller skating. Its popularity surged in the 1930s when players started bumping into each other to win, affecting the evolution of roller derby.

Over the decades the non-profit sport has experienced waves of heightened audience and participant popularity. In the 1970s many embraced derby, though the majority of the public perceived the sport as brutal and controversial. Though the mainstream still considers roller derby subversive, challenging feminine versus anti-feminine paradigms, roller derby has remained an international sport and has undergone a resurgence since about 2005.

Dickerson, 27, a recent Vixen addition"fresh meat" in derby termssays she was a surprised when her teammates asked her to perform in the burlesque show.

"But I'm a derby. I'm adventurous and up for anything," she says.

All the girls echo this sense of boldness in one way or another, even the ones who claim shyness in their everyday lives.

"It helped me come out of my shell, especially with leadership, business and communication. I've seen girls open up," says Thomas, an information technologist at Tougaloo College.

Thomas, who sports an equipment bag covered in pins that read "Shut Up & Skate" and "Roller Derby Saved My Soul," created one of the first derby social networking Web sites, derbynation.ning.com. The site currently has 1,331 users nationwide, and some from as far as London.

"Like Jacque," Thomas says, playfully projecting her voice in Sledge-Prince's direction. "At first she was quiet; now she won't shut up in practice."

Magnolia Roller Vixens Vice President Sledge-Prince, 33, revels in her roller derby persona. Arriving at the armory in an eggplant puff-sleeved blouse, black skirt and patent leather ankle boots, she moves through the burlesque dance in her work attire. When it's time for derby practice, however, she wears the least clothing of anyone, stripping down to skates, blue knee highs, black spandex shorts and an athletic bra (and the ubiquitous helmet, knee and elbow guards, and depending on what part of practice, a mouth guard).

Sledge-Prince says her coworkers can't believe she's involved with roller derby. "I have a conservative appearance, but it's really my disguise. At work (in a doctor's office), I have to be nice all day, but in derby, I can beat these girls up. ... And I've made friends with females, people I never thought I'd meet," she says.

The unique bonding happens not just within teams, but between opposing teams, too. "There is a lot of camaraderie," Thomas says. "We'll fight in the game, but then we all go out and drink and have fun after. My husband doesn't get that; it blows his mind. He says you'd never see baseball teams doing that."

Petite, 29-year-old Reeta "Rowdy Reeta Ricochet" Allen, who works for the Apple store, wears a helmet covered in stickers, including a faded "Free Tibet" insignia. She skates around the armory backward with confidence, using a pink digital camera to snap shots of her teammates. Allen is the team coach and introduces herself with an aura of toughness. "I make them hurt," she says.

When she stops to let me take a picture, though, she poses like a pin-up girl.

"We're the Vixens," Allen says. "We've got to maintain the sexy."

Co-founder of the Pretty Things Peep Show, Go-Go Amy (the only name she'll give) says the derby-girl duality is one of the main reasons she loves them. "They're tough! They kick the sh*t out of each other. They do not mess around. But they wear pigtails and look cute while they do it."

"Roller Derby Revue" is Nov. 15 at 8 p.m. at The Auditorium (622 Duling Ave). Cost for the event is $10 in advance and $15 at the door. The Magnolia Roller Vixens ask you to bring new and unopened bras, underwear and undershirts in adult and children's sizes to donate to Stewpot Community Services. For more information, visit http://www.magnoliarollervixens.com.

Hells yea! This Sunday is going to be a ton of fun! Can't wait to shimmy on stage! Thanks Charlotte & JFP for the awesome article! Keep an eye out! The Vixens are gonna be skating on a track near you in 2010! We're still recruiting skaters and referees if you are interested in getting in on this action! http://www.magnoliarollervixens.com