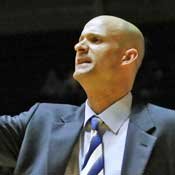 These are heady times for the Mississippi State and Ole Miss men's basketball teams.

The Bulldogs and Rebels are picked to finish 1-2 in the SEC West. Both teams have players on the preseason All-SEC first team: MSU senior forward Jarvis Varnado and Ole Miss sophomore guard Terrico White. Both were unanimous choices.

Varnado leads an experienced band of Bulldogs (for once) who won the 2009 SEC Tournament and lost in the first round of the NCAAs. Dee Bost, Barry Stewart, Kodi Augustus and Romaro Osby are among the key returnees.

"It is the most experience I have had in a long time, and we only have two seniors coming back," MSU coach Rick Stansbury said at SEC Media Days. "We have been unfortunate with some guys transferring and some losses to the NBA draft. There is no question we are better off at this point in the year than we were at this point last year."

Two newcomers have created much buzz. Freshman Renardo Sidney, who's from Jackson but played high school ball in Los Angeles, is one of the nation's top prospects at power forward. But the NCAA is still investigating his amateur status. Many doubt Sidney will ever play for the Bulldogs.

John Riek, a 7-foot-1-inch center from Sudan, was a much-heralded player before suffering a severe knee injury. He appears to be on his way to a full recovery, but the NCAA has suspended him for the first nine games, anyway. The NCAA insists on continuing the amateur charade in Division I athletics. And I'm sure if either of these men were at Kentucky, they would already be cleared to play.

Varnado is the main reason the Bulldogs are ranked in the top 25 in two preseason polls. He blocked 170 shots last season and should break the NCAA career record for blocks this season.

"(Varnado) has a chance to do something no one else has done," Stansbury said. "You think about the Bill Russells, Wilt Chamberlins and Shaquille O'Neals, all the great shot blockers that have played this game, and he has the potential to be the best ever. He deserves all the credit he gets."

"We are healthy, happy, focused and excited about getting our guys back." Rebels coach Andy Kennedy said at SEC Media Days. " When you have what we went through last year with season-ending injuries, it changed our guys' focus, and it really made them focus right where they needed to, so I am excited about the season."

Things were a bit too exciting last season. Kennedy was arrested on misdemeanor assault charges outside a bar in Cincinnati last December. He later pleaded guilty to a lesser charge of disorderly conduct.

Even worse, guards Chris Warner, Eniel Polynice and Trevor Gaskins suffered season-ending knee injuries. That led to the emergence of White, who averaged 18 points a game and was named SEC freshman of the year. White did so well that he briefly considered jumping to the NBA.

"That was the silver lining if you are looking for the positive in what we went through last year," Kennedy said of White. "We asked him to transform into a point guard and lead his SEC team and he took on the challenge."

What We Learned
Mississippi State 31, Kentucky 24:
Anthony Dixon can play, can't he? If Dan Mullen had given Dixon the ball one more time against LSU, the Bulldogs might have beaten the Tigers.

Auburn 33, Ole Miss 20:
It's a good thing the Rebels are playing another FCS team, Northern Arizona, this week. If Ole Miss can't qualify for a bowl game, maybe UM can earn a spot in the FCS playoffs.

Houston 50, Southern Miss 43:
The Golden Eagles keep scoring too early at the end of games. USM tied the game against Houston with 58 seconds remaining. That's an eternity for a team like the Cougars.

Jackson State, idle:
Dedric McDonald will start at quarterback Saturday for the Tigers. JSU's constant shuffling of QBs is a symptom of a larger problem.

Millsaps 61, Sewanee 7:
The Majors have earned at least a share of their fourth consecutive SCAC title. Millsaps doesn't rebuild, it reloads.

Howard Payne 38, Mississippi College 24:
The Choctaws can't afford another stumble if they want to win the ASC title.

Lambuth 54, Belhaven 16:
The Blazers just aren't as good away from the cozy confines of Newell Field.

This Week's Winners
The teams that will celebrate victories this week are: Ole Miss, Jackson State, Mississippi College, Belhaven College and Delta State.