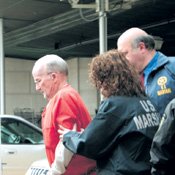 On May 21, the 17-judge panel of the 5th U.S. Circuit Court of Appeals heard oral arguments in the case of James Ford Seale. The en banc court is re-adjudicating Seale's 2007 kidnapping and conspiracy conviction related to the 1964 murders of Charles Moore and Henry Dee.

Franklin County officials arrested Seale and fellow klansman Charles Edwards after navy divers found the beaten and drowned bodies of Moore and Dee in the Mississippi River. Officials refused to prosecute the pair at the time, however, and they went free. Seale was rumored to be dead when Moore's brother, Thomas, began his own investigation with the assistance of the Jackson Free Press and Canadian filmmaker David Ridgin in 2005. The team's investigation quickly found Seale to be alive, and the Justice Department reopened the case later the same year.

Under immunity from prosecution, Edwards testified against Seale in the 2007 trial, and Seale received three life sentences for his part in the crime. In September 2008, however, a three-judge panel of the 5th Circuit overturned Seale's conviction, agreeing with the defense that the statute of limitations for the kidnapping had expired.

The issue of the statute of limitations was broached during the initial trial, but U.S. District Judge Henry Wingate agreed with prosecutors at the time. That ruling was the basis for the defense appeal, who have never argued that Seale did not commit the crimes; only that the state took too long to prosecute him.

"While we are mindful of the seriousness of the crimes at issue, we cannot abdicate our duty to faithfully apply a valid limitations period," the court's unanimous decision stated Sept. 9, 2008. At issue is the span of time between 1968 and 1994 when the death penalty was not applicable to federal kidnapping charges. The defense argues that because of this, a five-year statute of limitations automatically applies. The prosecution, however, argued that the crime remained classified as a capital crime even without the death penalty, and therefore no statute of limitations exists.

A decision from Thursday's hearing could take months. Meanwhile, Seale remains in prison, despite several motions for his release from his defense team, citing Seale's poor health.