Legislature Back in Session 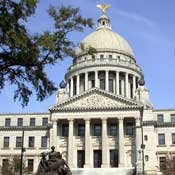 State lawmakers have returned to Jackson today to hammer out the 2010 budget. The Legislature must agree on the Mississippi budget by the end of June as the new fiscal year begins July 1.

On the table is a proposal from Gov. Haley Barbour to set aside $60 million in federal stimulus funds for next year. In special sessions last week, the House and Senate have agreed not to levy the governor's proposed $90 million tax on hospitals to fill the state's Medicaid shortfall, according to WAPT. Lawmakers abandoned the proposal when they could not settle on an amount for the tax.

I think it is time to elect new leaders in 2011. THese old cats have had their time. We need some ppl who will make compromises and pass a good budget. Where are the Hinds County Caucus??? Hillman Frazier, Calhoun, etc. If they not provided us w/ great leadership, lets give them the boot in 2011.